A Thousand Miles Up The Nile

A Thousand Miles Up The Nile – Amelia Ann Blandford

Miss Blandfords’ ‘A Thousand Miles Up the Nile ‘ is one of the classics of the literature of Egypt. Her work as an Egyptologist, and deserved reputation as such, began with the expedition of which it is the narrative. The author has studied her subjects with great care; she has consulted and compared authorities ancient and modern, with much industry; and her examination of the remains she describes was a labor of love and enthusiasm. . . Nor does she confine her attention to art and archaeology. She gives many fresh and lively sketches of the often described life of the dahabecah; of its great events, such as sand-storms and of the natives. 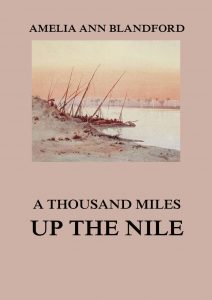 A Thousand Miles Up The Nile

A Thousand Miles Up The Nile.