A Son at the Front

A Son at the Front – Edith Wharton

Mrs. Wharton’s story is the simple one of John Campton, the great American painter, whose only son, born in France, is subject to military service. The father, his divorced wife, and her banking husband all interest themselves to keep the boy out of danger, but he eludes their care and while ostensibly on staff work he is really with his regiment at the front. He is wounded, recovers, goes back, is wounded again and returns to die. The theme of the novel is American participation in the war, dramatized by the conversion of John Campton from a position of indifferent neutrality at the outset to a conviction that no ‘civilized man could afford to stand aside from such a conflict.’ Its substance is the goings and comings of Campton among all sorts of people, his humble French servants, his distinguished Parisian friends, his nondescript fellow countrymen, each of whom represents some attitude towards the War. 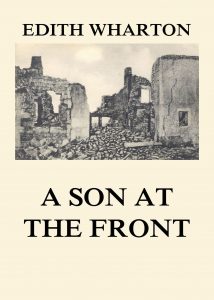 A Son at the Front.

Excerpt from the first chapter:

JOHN Campton, the American portrait-painter, stood in his bare studio in Montmartre at the end of a summer afternoon contemplating a battered calendar that hung against the wall.

Campton looked at this date with a gaze of unmixed satisfaction. His son, his only boy, who was coming from America, must have landed in England that morning, and after a brief halt in London would join him the next evening in Paris. To bring the moment nearer, Campton, smiling at his weakness, tore off the leaf and uncovered the 31. Then, leaning in the window, he looked out over his untidy scrap of garden at the silver-grey sea of Paris spreading mistily below him.

A number of visitors had passed through the studio that day. After years of obscurity Campton had been projected into the light—or perhaps only into the limelight—by his portrait of his son George, exhibited three years earlier at the spring show of the French Society of Painters and Sculptors. The picture seemed to its author to be exactly in the line of the unnoticed things he had been showing before, though perhaps nearer to what he was always trying for, because of the exceptional interest of his subject. But to the public he had appeared to take a new turn; or perhaps some critic had suddenly found the right phrase for him; or, that season, people wanted a new painter to talk about. Didn’t he know by heart all the Paris reasons for success or failure?

The early years of his career had given him ample opportunity to learn them. Like other young students of his generation, he had come to Paris with an exaggerated reverence for the few conspicuous figures who made the old Salons of the ’eighties like bad plays written around a few stars. If he could get near enough to Beausite, the ruling light of the galaxy, he thought he might do things not unworthy of that great master; but Beausite, who had ceased to receive pupils, saw no reason for making an exception in favor of an obscure youth without a backing. He was not kind; and on the only occasion when a painting of Campton’s came under his eye he let fall an epigram which went the round of Paris, but shocked its victim by its revelation of the great man’s ineptitude.

Campton, if he could have gone on admiring Beausite’s work, would have forgotten his unkindness and even his critical incapacity; but as the young painter’s personal convictions developed he discovered that his idol had none, and that the dazzling maestria still enveloping his work was only the light from a dead star.

All these things were now nearly thirty years old. Beausite had vanished from the heavens, and the youth he had sneered at throned there in his stead. Most of the people who besieged Campton’s studio were the lineal descendants of those who had echoed Beausite’s sneer. They belonged to the types that Campton least cared to paint; but they were usually those who paid the highest prices, and he had lately had new and imperious reasons for wanting to earn all the money he could. So for two years he had let it be as difficult and expensive as possible to be “done by Campton; and this oppressive July day had been crowded with the visits of suppliants of a sort unused to waiting on anybody’s pleasure, people who had postponed St. Moritz and Deauville, Aix and Royat, because it was known that one had to accept the master’s conditions or apply elsewhere.

The job bored him more than ever; the more of their fatuous faces he recorded the more he hated the task; but for the last two or three days the monotony of his toil had been relieved by a new element of interest. This was produced by what he called the “war-funk,” and consisted in the effect on his sitters and their friends of the suggestion that something new, incomprehensible and uncomfortable might be about to threaten the ordered course of their pleasures.

Campton himself did not “believe in the war” (as the current phrase went); therefore he was able to note with perfect composure its agitating effect upon his sitters. On the whole the women behaved best: the idiotic Mme. de Dolmetsch had actually grown beautiful through fear for her lover, who turned out (in spite of a name as exotic as hers) to be a French subject of military age. The men had made a less creditable showing—especially the big banker and promoter, Jorgenstein, whose round red face had withered like a pricked balloon, and young Prince Demetrios Palamedes, just married to the fabulously rich daughter of an Argentine wheat-grower, and so secure as to his bride’s fortune that he could curse impartially all the disturbers of his summer plans. Even the great tuberculosis specialist, Fortin-Lescluze, whom Campton was painting in return for the physician’s devoted care of George the previous year, had lost something of his professional composure, and no longer gave out the sense of tranquillizing strength which had been such a help in the boy’s fight for health. Fortin-Lescluze, always in contact with the rulers of the earth, must surely have some hint of their councils. Whatever it was, he revealed nothing, but continued to talk frivolously and infatuatedly about a new Javanese dancer whom he wanted Campton to paint; but his large beaked face with its triumphant moustache had grown pinched and grey, and he had forgotten to renew the dye on the moustache.

Campton’s one really imperturbable visitor was little Charlie Alicante, the Spanish secretary of Embassy at Berlin, who had dropped in on his way to St. Moritz, bringing the newest news from the Wilhelmstrasse, news that was all suavity and reassurance, with a touch of playful reproach for the irritability of French feeling, and a reminder of Imperial longanimity in regard to the foolish misunderstandings of Agadir and Saverne.

Now all the visitors had gone, and Campton, leaning in the window, looked out over Paris and mused on his summer plans. He meant to plunge straight down to Southern Italy and Sicily, perhaps even push over to North Africa. That at least was what he hoped for: no sun was too hot for him and no landscape too arid. But it all depended on George; for George was going with him, and if George preferred Spain they would postpone the desert…