Willa Sibert Cather (December 7, 1873 – April 24, 1947) was an American writer who achieved recognition for her novels of frontier life on the Great Plains, including O Pioneers! (1913), The Song of the Lark (1915), and My Ántonia (1918). In 1923 she was awarded the Pulitzer Prize for One of Ours (1922), a novel set during World War I.
Cather grew up in Virginia and Nebraska, and graduated from the University of Nebraska–Lincoln. She lived and worked in Pittsburgh for ten years, supporting herself as a magazine editor and high school English teacher. At the age of 33 she moved to New York City, her primary home for the rest of her life, though she also traveled widely and spent considerable time at her summer residence on Grand Manan Island, New Brunswick.
(Text taken from wikipedia.com and licenced under Creative Commons Attribution-ShareAlike License)

Willa Cather surely belongs to America’s most famous authors of the early 20th century. Most of her stories are set in the Great Plains, especially in Nebraska, where she was born and where she lived. This volume is a carefully selected compilation of more than 25 of her most exciting and successful short stories. 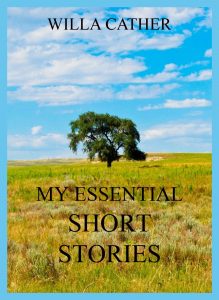 It was Paul’s afternoon to appear before the faculty of the Pittsburgh High School to account for his various misdemeanors. He had been suspended a week ago, and his father had called at the Principal’s office and confessed his perplexity about his son. Paul entered the faculty room suave and smiling. His clothes were a trifle outgrown, and the tan velvet on the collar of his open overcoat was frayed and worn; but for all that there was something of the dandy about him, and he wore an opal pin in his neatly knotted black four-in-hand, and a red carnation in his buttonhole. This latter adornment the faculty somehow felt was not properly significant of the contrite spirit befitting a boy under the ban of suspension. Read more/Mehr lesen...

One of Ours – Willa Cather

“One of Ours” is the 1922 Pulitzer price winning novel of Willa Cather. Claude Wheeler was “one of ours” who left his Nebraska farm to fight and die in the Great war. He was an eager, sensitive youth, to whose inarticulate longings life had brought no answer. In the world which seemed so catisfying to all around him he had never felt at home. Except with his mother and faithful old Mahailey. all his relationships had been disappointing and even between himself and his mother her narrow religious beliefs had made a barrier. His marriage proved the crowning disappointment of all. He lived on his prosperous acres in the midst of material plenty, hungry for he knew not what, longing to do something with his life. Miss Gather makes the war a means of release to his baffled soul. He went gladly, never questioning that the call was clear, the cause glorious. He found in Franice the youth he had never had, companionship, a meaning to life, and died before the disillusionment which he could never have borne … Read more/Mehr lesen...

Willa Cather was the 1922 winner of the Pulitzer Prize. Her breakthrough in literature were the three novels featured here in this edition, the so-called “Great Plains Trilogy”. All three novels stage in Nebraska and the surrounding Great Plains territory and deal with the life there, family challenges and romance. Included are:

O Pioneers!
The Song of the Lark
My Antonia 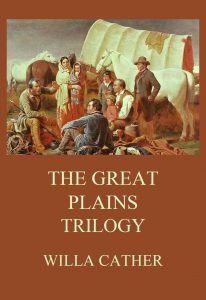 Plot summary of the titles in The Great Plains Trilogy (from Wikipedia):

Part I – The Wild Land]
On a windy January day in Hanover, Nebraska, Alexandra Bergson is with her five-year-old brother Emil, whose little kitten has climbed a telegraph pole and is afraid to come down. Alexandra asks her neighbor and friend Carl Linstrum to retrieve the kitten. Later, Alexandra finds Emil in the general store with Marie Tovesky. They are playing with the kitten. Marie lives in Omaha and is visiting her uncle Joe Tovesky. Read more/Mehr lesen...

Alexander’s Bridge is the story of a great engineer who has reached the crisis in his life when success and responsibility have begun to fret and weary a restless, energetic nature inherently impatient of restraint. Alexander tries to shake himself free, to go back to the time when life was at its highest, most adventurous pitch. He rebels against life, and life defeats him. The story is a love story, for it is in his relations with two women, Winifred, his wife, and Hilda, a young Irish actress, that Alexander learns to know himself. His pursuit of Hilda, begun in a spirit of adventure, grows into a destroying obsession. It yields him intoxicating moments of delight, in which he recaptures the sense of youthful freedom and power; but it torments him more and more with the consciousness of an ever-growing breach in his own inner integrity. The situation is developed with a dramatic skill that holds one’s absorbed attention throughout. It is a story of brilliant and unusual power. Read more/Mehr lesen...