The most ambitious and, if one excepts the Child’s Garden, the best of Stevenson’s work in verse belongs to his thirty-seventh and thirty-eighth years. The ballad was a literary form which he did not attempt until his second visit to America. Ticonderoga, founded on a legend of the Camerons, was written at Saranac, and published in ‘ Scribner’s Magazine,’ December 1887. In the following year at Tautira in the island of Tahiti, he learnt the legend which in The Song of Rahero is told with a flood of savage gusto in keeping with its tragic subject. The ballad, and that of The Feast of Famine, in which were ‘strung together some of the more striking … Read more.../Mehr lesen ...

This volume contains three stories, all from the realm of fantastic and supernatural tales: The Misadventures of John Nicholson, The Body Snatcher, and The Story of a Lie, all juvenile work of Stevenson. 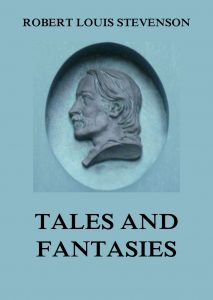 A literary celebrity during his lifetime, Stevenson now ranks as the 26th most translated … Read more.../Mehr lesen ...

When the publishers asked for a successor to Treasure Island, Stevenson turned to the period of the Wars of the Roses as a setting for a tale of adventure frankly written for youthful readers. The only preparation a boy needs for enjoying “The Black Arrow ” is some slight acquaintance with Shakespeare or Walter Scott; nay, if he have but skimmed the briefest history of the brave old medieval times, and knows what a part in them the long-bow and the cross-bow played, and what a salet is, and what a lance, he will need no further introduction to this tale of the early days of Richard Crookback—a tale “retold” (like that of … Read more.../Mehr lesen ...

Evidently the title of this book was intended to apply to the whole story of Stevenson’s journey to California in August 1879 to arrange his marriage with Mrs. Osbourne. The words fit the record of his experiences both as practically a steerage passenger and on the second stage of the journey —by rail across America—which forms the subject of ‘Across the Plains’. Its great realism, apart from the description of natural effects, was a new departure for Stevenson, who wrote that he had ‘ sought to be prosaic in view of the nature of the subject.’ 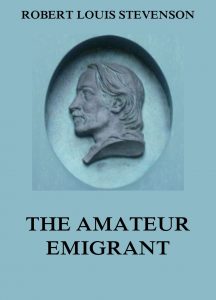 Stevenson wrote four dramas, all in collaboration with William Ernest Henley. The dramas, all of them included in this edition, are: Admiral Guinea, Beau Austin, Deacon Brodie and Macaire. 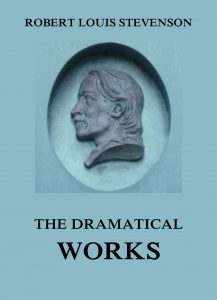 A literary celebrity during his lifetime, Stevenson now ranks as the 26th most translated author in the world. … Read more.../Mehr lesen ...

Across the Plains – Robert Louis Stevenson

The successor in our day to both Jules Verne and Edward Bellamy is H. G. Wells, and his book, “The World Set Free,” embodies more of his creed than anything heretofore published. The goal of Mr. Wells’ thinking is the end of war and the realization upon earth of a real “parliament of the world.” This outcome is to be reached, not as in Bellamy’s scheme by peaceful evolution, but only after the present social order has been rent asunder by the release of certain elemental physical forces to be revealed to man through processes similar to those that have led to the great discoveries and inventions of the more recent past. The … Read more.../Mehr lesen ...

The Greatest Street in the World

The Greatest Street in the World – Stephen Jenkins

When all its phases are taken in the aggregate, Broadway holds a position that is unique and pre-eminent among the great avenues of the world. In this book Mr. Jenkins has presented the whole history of Broadway, old and new, through all the miles of its long course from the Bowling Green to Albany; its historic associations from pre-Revolutionary times to the present, its theatres and the actors that made them famous, its literary incidents and personalities, the busy hum of city life that rises heavenward between its towering buildings, and all the abundant energy that flows through it ceaselessly. 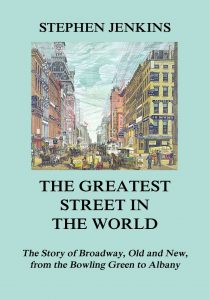 The Greatest Street in the World

The Story of the Bronx

The Story of the Bronx – Stephen Jenkins

The romantic history of the northern section of Greater New York from the days of Jonas Bronk, after whom the Bronx was named, through the centuries crowded with events that have issued into the present. The geographical landmarks acquire a new significance as around them this accurate historian of local events and conditions weaves the substantial fabric of fact and more sparingly the lighter web of tradition. Among his most interesting chapters are those touching on colonial manners and customs, the Bronx during the Revolution, the churches, early and later means of communication, and ferries and bridges. 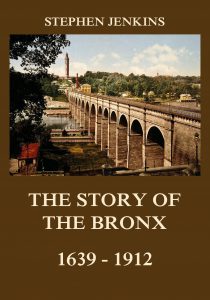 The Story of the Bronx

The Story of the Bronx.

Stephen Jenkins has chosen for the subject of this volume the oldest and most northerly of the post roads: that over which the first postrider went; which echoed to the war-whoop of the savage, saw the passage of soldiers during the French Wars; beheld the flocking of the minutemen upon the Lexington Alarm, later became the pathway of countless thousands of emigrants on their way to the rich valleys of the Mohawk and the Genesee, or to the fertile prairies of the Middle West. By this route, via New Haven, Hartford, Springfield, and Worcester, a monthly mail was established in 1673, “the first mail upon the continent of America,” as the author … Read more.../Mehr lesen ...

Society, Manners and Politics in the United States

Society, Manners and Politics in the United States – Michel Chevalier

Mr. Chevalier’s chief merits as a traveller consist in the fact, that he directs his attention to the most important concerns and interests of the people, among whom he travels. He has a profound sense of the worth of Humanity, and he values manners, politics, institutions, only as they bear on its progress. He clearly perceives that industry must hold the chief rank among the material interests of mankind, and consequently he bestows, as he ought, the greater part of his attention upon the state of industry and the industrious classes. We wish every traveller would do the same, not in our own country only, but in every other. … Read more.../Mehr lesen ...