It is certainly an easy assumption to make that the readers of H. G. Wells’ novel, “The Sleeper Awakes,” will agree that it is a truly wonderful production. Mr. Wells has devoted himself strictly to the weird and fantastic, and with great success in every case. This book is of the same character, but it is told so vividly, it is wrought out with such life-like detail, that the reader forgets that the book is only the product of a novelist’s fancy, and lives for the time intent on the strange scenes and customs and peoples of London in 2100. “When the Sleeper Wakes” is a story of the future. Its plot is … Read more.../Mehr lesen ...

A Short History Of The World – H. G. Wells

The romance of world history is Mr. Wells’ theme. Shorn of elaboration and complication,  this new book forms an interesting, informing and authoritative story of man through the ages. The book is meant to be read straightforwardly almost as a novel is read. It gives in the most general way an account of our present knowledge of history shorn of elaboration and everything has been done to make it clear and vivid … to meet the needs of the busy general reader, too driven to study the maps and the time charts of other works. 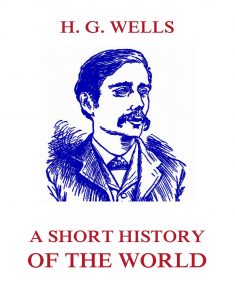 A Short History Of The World.

The War of the Worlds

Mr. H. G. Wells wears his skeleton of scientific knowledge so palpably on the outside that the most erratic flights of his imagination are received with a docile hushfulness accorded to few of the inventive. In The War of the Worlds, with clean-cut, stirring language, he discusses the exquisite possibilities of a bombardment of London by the planet Mars. The outrage upon experience which, with the gravity of a Swift, he calls upon us to accept is so tremendous and far-reaching as to counteract the effect of humorous details and leave a sense of horror and baffled intelligence. Over a track of forty million miles, in obedience to predictions at Lick … Read more.../Mehr lesen ...

Such a kind of literature as that of which The Invisible Man is a specimen is inevitable. We are living in an age of inventions. The conditions of life are being more or less modified by these. It is very natural to imagine the development of invention ; very natural also to ask whether the world will be any happier for it. Mr. Wells has remarkable literary abilities. He has also had a good scientific training, and he is saved alike by his sense and knowledge from the insanity which might easily wreck such attempts as these. The Invisible Man is decidedly striking and original, and what is rare in such books, it … Read more.../Mehr lesen ...

The First Men in the Moon

There is probably no other living writer than the author of “The War of the Worlds” whose brain possesses that abnormal twist requisite to the production of such a story as “The First Men In the Moon.” The conception of a planet peopled by a race of articulated creatures, gigantic insects, endowed with something akin to human intelligence, whose entire life is passed not upon the moon’s surface, but miles below it. In chambers and passages hollowed out after the fashion of a colossal ant hill—all this described with that touch of verisimilitude which is the one thing which makes H. G. Wells readable, gives an uncanny, at times almost … Read more.../Mehr lesen ...

No book is provoking a more animated discussion among students of the social sciences at the present time than H. G. Wells’ Outline of History. The author’s task, as he himself sets it, is to tell, “truly and clearly, in one continuous narrative, the whole story of life and mankind so far as it is known today.” But while these two volumes are plainly for the general reader rather than for the special student of history, it does not follow that they contain nothing beyond an endless parade of names and dates. Their chief value, indeed, is in the author’s interpretation of what he writes about. Events are appraised and men are weighed … Read more.../Mehr lesen ...

The Island of Doctor Moreau

It is a shipwrecked student, whom chance carries to “The island of Dr. Moreau,” who tells the story. It is a daring and gruesome tale, replete with horrors. Dr. Moreau is a celebrated English biologist and vivisectionist. His experiments are of such a nature that he has had to fly from humanity. His aim has been to construct a human being with brutes and parts of brutes as his material. They are constructed In his “house of pain” and learn to speak and to walk erectly, but all relapse Into animalism. His island is peopled with these monsters. 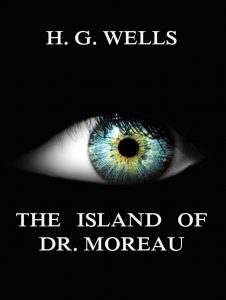 The Island of Doctor Moreau

The Island of Doctor Moreau.

The successor in our day to both Jules Verne and Edward Bellamy is H. G. Wells, and his book, “The World Set Free,” embodies more of his creed than anything heretofore published. The goal of Mr. Wells’ thinking is the end of war and the realization upon earth of a real “parliament of the world.” This outcome is to be reached, not as in Bellamy’s scheme by peaceful evolution, but only after the present social order has been rent asunder by the release of certain elemental physical forces to be revealed to man through processes similar to those that have led to the great discoveries and inventions of the more recent past. … Read more.../Mehr lesen ...

Mr. Wells’s Wheels of Chance is assuredly one of the best books he has written. It is as delightful a jeu d’esprit as we have seen for many a day. Mr. Wells has a vein of the richest and most delicate humor, which enlivens every page. The hero is an original conception—original, because he comes from so very familiar a type that he is, indeed, the last hero a novelist would ordinarily select. He is a clerk in a dry goods establishment, absolutely commonplace in body, mind, and soul. For this very reason his adventures on his cycling tour in southern England make delightful reading—his deeds, words, and thoughts are so completely … Read more.../Mehr lesen ...