New Hampshire – A Poem with notes and grace notes

New Hampshire is a collection of poems written by Robert Frost and first published in the United States in 1923. The work was awrded a Pulitzer Prize. The book includes some of the most prominent and best-known poetry of Frost, including ‘New Hampshire’, ‘Stopping by Woods on a Snowy Evening’ and many more. 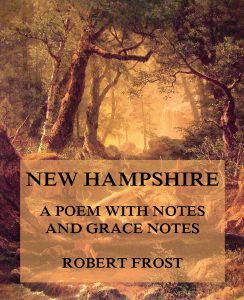 New Hampshire is a 1923 volume of poems written by Robert Frost which won the 1924 Pulitzer Prize for Poetry.

The book included several of Frost’s most well-known poems, including “Stopping by Woods on a Snowy … Read more.../Mehr lesen ...