‘The World Crisis’ is Winston Churchill’s narrative of World War I, published in several volumes. Although nominally starting in 1911 when Churchill became head of the Admiralty, the first volume commences in 1870 with the Franco-Prussian War and ends with the events in Turkey and on the Balkan in 1914. Churchill’s account is generally acknowledge as his masterpiece and a valuable contribution to the history of the War. 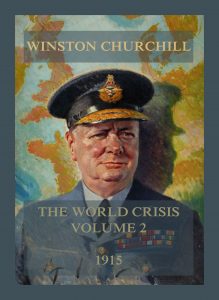 Only available in the USA.

1915 is described as a “year of ill-fortune to the cause of the Allies”, starting with the Deadlock in the West, mention of Tanks and Smoke, and ending with the Dardanelles campaign (Gallipoli). Churchill complains in his preface that “upon me alone among the high authorities concerned (with the Dardanelles) was the penalty inflicted – not of loss of office, for that is a petty thing – but of interruption and deprivation of control while the fate of the enterprise was still in suspense”.