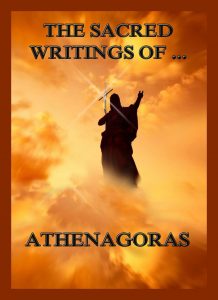 Although his work appears to have been well-known and influential, mention of him by other early Christian apologists, notably in the extensive writings of Eusebius, is strangely absent. … Read more.../Mehr lesen ...

The moral treatises contain much that will instruct and interest the reader; while some views will appear strange to those who fail to distinguish between different ages and different types of virtue and piety. Augustine shared with the Greek and Latin fathers the ascetic preference for voluntary celibacy and poverty. He accepted the distinction which dates from the second century, between two kinds of morality: a lower morality of the common people, which consists in keeping the ten commandments; and a higher sanctity of the elect few, which observes, in addition, the evangelical counsels, so called, or the monastic virtues. He practiced this doctrine after his conversion. He ought to have married … Read more.../Mehr lesen ...

The Sacred Writings of The Twelve Patriarchs

The Sacred Writings of The Twelve Patriarchs – Various Authors

The apocryphal work known as the Testaments of the Twelve Patriarchs professes to be, as its name implies, the utterances of the dying patriarchs, the sons of Jacob. In these they give some account of their lives, embodying particulars not found in the scriptural account, and build thereupon various moral precepts for the guidance of their descendants. The book partakes also of the nature of an Apocalypse: the patriarchs see in the future their children doing wickedly, stained with the sins of every nation; and thus they foretell the troubles impending on their race. Still at last God will put an end to their woe, and comfort is found in … Read more.../Mehr lesen ...

The Sacred Writings of the Early Liturgies – Various Authors

This book contains the following of the early liturgies: 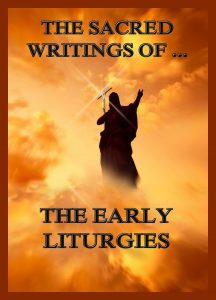 The Sacred Writings of the Early Liturgies.

The Divine Liturgy of Saint James (from wikipedia)

The Liturgy of Saint James or Jacobite Liturgy is the oldest complete form of the Eastern varieties of the Divine Liturgy still in use among certain Christian Churches.

It is based on the traditions of the ancient rite of the Early Christian Church of Jerusalem, as the … Read more.../Mehr lesen ...

Hilary, bishop of Poitiers, holds the highest rank among the Latin writers of his century. Designated already by Augustine as “the illustrious doctor of the churches,” he by his works exerted an increasing influence in later centuries; and by Pius IX. he was formally recognized as “universae ecclesiae doctor” at the synod of Bordeaux in 1851. This edition contains his most important texts. 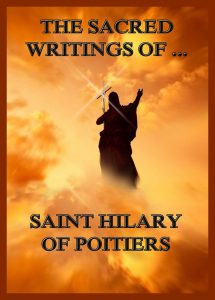 The Sacred Writings of Saint Hilary of Poitiers.

The writings of Hilary of Poitiers (from wikipedia)

Recent research has distinguished between Hilary’s thought before his period … Read more.../Mehr lesen ...

The Canons Of Dordrecht

The Canons of Dordrecht is the judgment of the National Synod held in the Dutch city of Dordrecht in 1618-19. Today, these canons are part of the Three Forms of Unity, one of the confessional standards of many of the Reformed churches around the world, including the Netherlands, South Africa, Australia, and North America. Their continued use as a standard still forms an unbridgable problem preventing close cooperation between the followers of Jacob Arminius, the Remonstrants, and Dutch Reformed Churches. 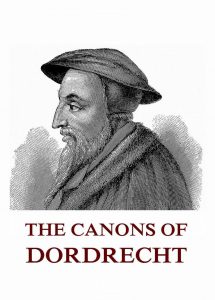 The Canons Of Dordrecht

The Canons Of Dordrecht.

Basics on the Canons (from wikipedia.com)

The Canons of Dort, or Canons of

The Sacred Writings of Saint Basil

The principal theological writings of Basil, bishop of Caesarea, are his De Spiritu Sancto, a lucid and edifying appeal to Scripture and early Christian tradition, and his three books against Eunomius, the chief exponent of Anomoian Arianism. He was a famous preacher, and many of his homilies, including a series of lenten lectures on the Hexaëmeron, and an exposition of the psalter, have been preserved. His ascetic tendencies are exhibited in the Moralia and Regulae, ethical manuals for use in the world and the cloister respectively. His three hundred letters reveal a rich and observant nature, which, despite the troubles of ill-health and ecclesiastical unrest, remained optimistic, tender and even playful. … Read more.../Mehr lesen ...

The Sacred Writings of Saint Barnabas

The Epistle of Barnabas contains no clue to its author nor to those for whom it was intended. Its aim is to impart to its readers the perfect wisdom (gnosis), that is an exact knowledge of the economy of salvation. It is made up of two parts, the subject of each being announced in verses 6 and 7 of the first chapter. The first part (ch. i-v, 4) is hortatory; in the evil days that are now at hand in which the end of the world and the Judgment shall appear, the faithful, freed from the bonds of the Jewish ceremonial law, are to practise the virtues and to flee from sin. … Read more.../Mehr lesen ...

The Sacred Writings of Cyril of Jerusalem

Cyril, bishop of Jerusalem, where he was probably born, was ordained a presbyter in 345, and had the instruction of the catechumens entrusted to him. In 350 he was elevated to the see of Jerusalem, and became deeply involved in the dogmatic controversies of his time. His metropolitan, Acacius of Caesarea, inclined to Arianism, while Cyril strongly espoused the Nicene creed and was, in consequence, deposed for a time. On the death of the emperor Constantine he was restored; but on the accession of Valens, an Arian emperor, he had once more to resign his post till the accession of Theodosius permitted him to return finally in peace in … Read more.../Mehr lesen ...

The Sacred Writings of Saint Cyprian

The Bishop of Carthage, one of the most illustrious in the early history of the church, and one of the most notable of its early martyrs, was born about the year 200, probably at Carthage. He was of patrician family, wealthy, highly educated, and for some time occupied as a teacher of rhetoric at Carthage. Of an enthusiastic temperament, accomplished in classical literature, he seems while a pagan to have courted discussion with the converts to Christianity. Confident in his own powers, he entered ardently into what was no doubt the great question of the time at Carthage as elsewhere. He sought to vanquish, but was himself vanquished by, the new … Read more.../Mehr lesen ...