A genealogical dictionary of our early colonists. Every volume shows three generations of those who came before 1692. Although more than a century has elapsed since the publication of this monumental work, it remains the standard to our day. We do not mean that new information has not been unearthed or that the work is free from errors, but Savage had just the peculiar qualifications necessary. He was so persistent in gathering data and so conservative in his use of them, that a statement made on his authority bears great weight. This work has the whole of New England for its field.
This is volume 3, covering the surnames K – R. 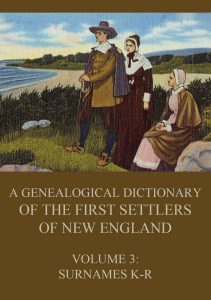 The Puritan migration to New England (from Wikipedia):

King James I of England made some efforts to reconcile the Puritan clergy in England, who had been alienated by the conservatism blocking reform in the Church of England. Puritans embraced Calvinism (Reformed theology) with its opposition to ritual and an emphasis on preaching, a growing sabbatarianism, and preference for a presbyterian system of church polity as opposed to the episcopal polity of the Church of England, which had also preserved medieval canon law almost intact. They opposed church practices that resembled Roman Catholic ritual.

This religious conflict worsened after Charles I became king in 1625, and Parliament increasingly opposed his authority. In 1629, Charles dissolved Parliament with no intention of summoning a new one, in an ill-fated attempt to neutralize his enemies there—which included numerous Puritans. With the religious and political climate so unpromising, many Puritans decided to leave the country. Some of the migration was also from the expatriate English communities in the Netherlands of nonconformists and Separatists who had set up churches there since the 1590s.

The Winthrop Fleet of 1630 included eleven ships led by the flagship Arbella; it delivered some 700 passengers to the Massachusetts Bay Colony. Migration continued until Parliament was reconvened in 1640, at which point the scale dropped off sharply. The English Civil War began in 1641, and some colonists returned from New England to England to fight on the Puritan side. Many then remained in England, since Oliver Cromwell backed Parliament as an Independent.

The Great Migration saw 80,000 people leave England, roughly 20,000 migrating to each of four destinations: Ireland, New England, the West Indies, and the Netherlands. The immigrants to New England came from every English county except Westmorland, and nearly half from East Anglia. The colonists to New England were mostly families with some education who were leading relatively prosperous lives in England. One modern writer, however, estimates that 7 to 10 percent of the colonists returned to England after 1640, including about a third of the clergymen.