‘A Little Swiss Sojourn’ was passed in the village of Villeneuve in the canton of Vaud, where a comfortable pension, vineyards galore, a gothic chapel, the placid lake, the snow-covered Alps, an occasional château (to let, furnished, for $500 a year) lent charm, dignity and ample opportunity for reminiscence to the visit of three months of which this narrative records the impressions. It is a pretty picture of an alien civilization, having certain quaint analogies with our own hard-favored rural New England, which Mr. Howells sets forth with characteristic appreciation. 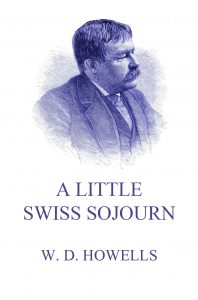 Out of eighty or ninety days that we passed in Switzerland there must have been at least ten that were fair, not counting the forenoons before it began to rain, and the afternoons when it cleared up. They said that it was an unusually rainy autumn, and we could well believe it; yet I suspect that it rains a good deal in that little corner of the Canton Vaud even when the autumn is only usually rainy. We arrived late in September and came away early in December, and during that time we had neither the fevers that raged in France nor the floods that raged in Italy. We Vaudois were rather proud of that, but whether we had much else to be proud of I am not so certain. Of course we had our Alpine scenery, and when the day was fair the sun came loafing up over the eastern mountains about ten o’clock in the morning, and lounged down behind the western tops about half-past three, after dinner. But then he left the eternal snows of the Dent-du-Midi all flushed with his light, and in the mean time he had glittered for five hours on the “bleu impossible” of the Lake of Geneva, and had shown in a hundred changing lights and shadows the storied and sentimentalized towers of the Castle of Chillon. Solemn groups and ranks of Swiss and Savoyard Alps hemmed the lake in as far as the eye could reach, and the lateen-sailed craft lent it their picturesqueness, while the steamboats constantly making its circuit and stopping at all the little towns on the shores imparted a pleasant modern interest to the whole effect, which the trains of the railroad running under the lee of the castle agreeably heightened.

The Swiss railroad was always an object of friendly amusement with the children, who could not get used to having the trains started by a small Christmas-horn. They had not entirely respected the English engine, with the shrill falsetto of its whistle, after the burly roar of our locomotives; and the boatswain’s pipe of the French conductor had considerably diminished the dignity of a sister republic in their minds; but this Christmas-horn was too droll. That a grown man, much more imposingly uniformed than an American general, should blow it to start a real train of cars was the source of patriotic sarcasm whenever its plaintive, reedy note was heard. We had come straight through from London, taking the sleeping-car at Calais, and rolling and bounding over the road towards Basle in a fashion that provoked scornful comparisons with the Pullman that had carried us so smoothly from Boston to Buffalo. It is well to be honest, even to our own adulation, and one must confess that the sleeping-car of the European continent is but the nervous and hysterical daughter of the American mother of sleeping-cars. Many express trains are run without any sleeper, and the charges for berths are ludicrously extravagant—five dollars apiece for a single night. It is not strange that the native prefers to doze away the night bolt-upright, or crouched into the corners of his repellently padded carriage, rather than toss upon the expensive pallet of the sleeping-car, which seems hung rather with a view to affording involuntary exercise than promoting dear-bought slumber. One advantage of it is that if you have to leave the car at five o’clock in the morning, you are awake and eager to do so long before that time. At the first Swiss station we quitted it to go to Berne, which was one of the three points where I was told by the London railway people that my baggage would be examined. I forget the second, but the third was Berne, and now at Delemont I looked about for the customs officers with the anxiety which the thought of them always awakens in the human heart, whether one has meant to smuggle or not. Even the good conscience may suffer from the upturning of a well-packed trunk. But nobody wanted to examine our baggage at Delemont, or at the other now-forgotten station; and at Berne, though I labored hard in several dialects with all the railway officials, I could not get them to open one of our ten trunks or five valises. I was so resolute in the matter that I had some difficulty to keep from opening them myself and levying duty upon their contents.

It was the first but not the last disappointment we suffered in Switzerland. A friend in London had congratulated us upon going to the Vaud in the grape season. “For thruppence,” he said, “they will let you go into the vineyards and eat all the grapes you can hold.” Arrived upon the ground, we learned that it was six francs fine to touch a grape in the vineyards; that every field had a watch set in it, who popped up between the vines from time to time, and interrogated the vicinity with an eye of sleepless vigilance; and that small boys of suspicious character, whose pleasure or business took them through a vineyard, were obliged to hold up their hands as they passed, like the victims of a Far Western road agency. As the laws and usages governing the grape culture run back to the time of the Romans, who brought the vine into the Vaud, I was obliged to refer my friend’s legend of cheapness and freedom to an earlier period, whose customs we could not profit by. In point of fact, I could buy more grapes for thruppence in London than in the Vaud; and the best grapes we had in Switzerland were some brought from Italy, and sold at a franc a pound in Montreux to the poor foreigners who had come to feast upon the wealth of the local vineyards.

It was the rain that spoiled the grapes, they said at Montreux, and wherever we complained; and indeed the vines were a dismal show of sterility and blight, even to the spectator who did not venture near enough to subject himself to a fine of six francs. The foreigners had protected themselves in large numbers by not coming, and the natives who prosper upon them suffered. The stout lady who kept a small shop of ivory carvings at Montreux continually lamented their absence to me: “Die Fremden kommen nicht, dieses regenes Wetter! Man muss Geduldt haben! Die Fremden kommen nicht!” She was from Interlaken, and the accents of her native dialect were flavored with the strong waters which she seemed always to have been drinking, and she put her face close up to that of the good, all-sympathizing Amerikaner who alone patronized her shop, and talked her sorrows loudly into him, so that he should not misunderstand.

But one must not be altogether unreasonable. When we first came in sight of the lake the rain lifted, and the afternoon sun gushed out upon a world of vineyards. In other words, the vines clothe all the little levels and vast slopes of the mountain-sides as far up as the cold will let the grapes grow. There is literally almost no other cultivation, and it is a very pretty sight. On top of the mountains are the chalets with their kine, and at a certain elevation the milk and the wine meet, while below is the water of the lake, so good to mix with both. I do not know that the Swiss use it for that purpose, but there are countries where something of the sort would be done.

When the train put us down at Villeneuve, among railway people as indifferent as our own at country stations, and much crosser and more snubbing, the demand for grapes began with the party who remained with the baggage, while a party of the second part went off to find the pension where we were to pass the next three months. The grape-seekers strolled up the stony, steaming streets of the little town, asking for grapes right and left, at all the shops, in their imperfect French, and returned to the station with a paper of gingerbread which they had bought at a jeweller’s. I do not know why this artist should have had it for sale, but he must have had it a long time, for it was densely inhabited. Afterwards we found two shops in Villeneuve where they had the most delicious petits gâteaux, fresh every day, and nothing but the mania for unattainable grapes prevented the first explorers from seeing them.

In the mean time the party of the second part had found the pension—a pretty stone villa overlooking the lake, under the boughs of tall walnut-trees, on the level of a high terrace. Laurel and holly hemmed it in on one side, and southward spread a pleasant garden full of roses and imperfectly ripening fig-trees. In the rear the vineyards climbed the mountains in irregular breadths to the belt of walnuts, beyond which were only forests and pastures. I heard the roar of the torrent that foamed down the steep; the fountain plashed under the group of laurels at the kitchen door; the roses dripped all round the house; and the lake lapped its shores below. Decidedly there was a sense of wet.

The house, which had an Italian outside covered with jasmine and wistarias, confessed the North within. There was a huge hall stove, not yet heated, but on the hearth of the pleasant salon an acceptable fire of little logs was purring. Beside it sat a lady reading, and at a table her daughter was painting flowers. A little Italian, a very little English, a good deal of French, helped me to understand that mademoiselle the landlady was momentarily absent, that the season was exceptionally bad, and that these ladies were glad of the sunshine which we were apparently bringing with us. They spoke with those Suissesse voices, which are the sweetest and most softly modulated voices in the world, whether they come from the throat of peasant or of lady, and can make a transaction in eggs and butter in the market-place as musical as chanted verse. To the last these voices remained a delight, and the memory of them made most Italian women’s voices a pang when we heard them afterwards.