Anne Shirley is an 11-year-old orphan waiting for an adoption. By mistake she comes to Matthew and Marilla Cuthbert of Prince Edward Island, a brother and a sister who actually wanted to adopt a boy to assist them with the work on their farm. When Anne finally arrives she has plenty to learn – and not only at school.

This is part one of the Anne of Green Gables series and one of the best-selling children novels of all time. 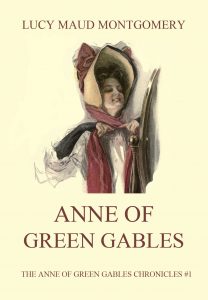 Summary of Anne of Green Gables (from Wikipedia):

Anne Shirley, a young orphan from the fictional community of Bolingbroke, Nova Scotia (based upon the real community of New London, Prince Edward Island),[9][10] is sent to live with Marilla and Matthew Cuthbert, siblings in their fifties and sixties after a childhood spent in strangers’ homes and orphanages. Marilla and Matthew had originally decided to adopt a boy from the orphanage to help Matthew run their farm at Green Gables, which is set in the fictional city of Avonlea. Through a misunderstanding, the orphanage sends Anne instead.

Anne is highly imaginative, eager to please and quite dramatic at times. However, she is very vain, despising her red hair and pale, thin frame, and is often quite talkative, especially when it comes to describing her fantasies and dreams. At first, stern and sharp Marilla says Anne must return to the orphanage, but after much observation and considering, along with Matthew’s newly-found strong liking to Anne, she decides to let her stay.

As a child of imagination, Anne takes much joy in life and adapts quickly, thriving in the close-knit farming village. Her imagination and talkativeness soon brighten up Green Gables.

The book recounts Anne’s adventures in making a home: the country school where she quickly excels in her studies; her friendship with Diana Barry, the girl living next door (her best or “bosom friend” as Anne fondly calls her); her budding literary ambitions; and her rivalry with her classmate Gilbert Blythe, who teased her about her red hair. For that, he earns her instant hatred, although he apologized many times. As time passes, Anne realizes she no longer hates Gilbert but cannot bring herself to speak to him.

The book also follows Anne’s adventures with her new-found friends. Episodes include her play-time with her friends Diana, a calm girl named Jane Andrews and a good-natured but often hysterical girl called Ruby Gillis, her run-ins with the unpleasant Pye sisters Gertie and Josie, and domestic mishaps such as dyeing her hair green while intending to dye it black or accidentally getting Diana drunk by giving her what she thought was raspberry cordial but turned out to be currant wine.

At fifteen, Anne goes to Queen’s Academy to earn a teaching license, along with Gilbert, Ruby, Josie, Jane, and several other students, excluding Diana much to Anne’s dismay. She obtains her license in one year instead of the usual two and wins the Avery Scholarship for the top student in English. Her attainment of this scholarship would allow her to pursue a Bachelor of Arts (B.A.) degree at the fictional Redmond College (based on the real Dalhousie University) on the mainland in Nova Scotia.

Near the end of the book however, tragedy strikes when Matthew dies of a heart attack after learning that all of his and Marilla’s money has been lost in a bank failure. Out of devotion to Marilla and Green Gables, Anne gives up the scholarship to stay at home and help Marilla, whose eyesight is failing. She plans to teach at the Carmody school, the nearest school available, and return to Green Gables on weekends. In an act of friendship, Gilbert Blythe gives up his teaching position at the Avonlea School to work at the White Sands School instead, knowing that Anne wants to stay close to Marilla after Matthew’s death. After this kind act, Anne and Gilbert’s friendship is cemented, and Anne looks forward to what life will bring next.