This is a highly sensational story, full of clever, sprightly, and powerful writing, although calculated to make us believe that modern society is sadly in need of moral improvement. Miss Braddon writes with great fluency and case, and appears to have a natural aptitude for plotting. In abandoning the stage and music – teaching for this department of literature, we do not think she has mistaken her vocation. The first chapter of ‘Aurora Floyd’ is a story in itself. It tells the history of Mr. Archibald Floyd who came from ‘the land o’ cakes,’ and worked his way up in the world till he became the senior partner of the great banking firm of Floyd, Floyd and Floyd, Lombard Street. It pictures him at his country residence, a bachelor past the prime of life, desolate and wealthy. ‘It follows him to the theatre of Lancashiretown, where he falls in love with an actress — Miss Eliza Prodder by name — and marries her immediately; her theatrical acquaintances assuring her, in language more sincere than elegant, that she would be a great fool to refuse an old fellow like him, with lots of money — for they had acquired an idea of his wealth by his treating them in an adjoining tavern. There is nothing very attractive about her but her bright, black eyes; she is a mystery to the ladies who meet her at her new home, and they speak evil and are jealous of her; she is amazed at the grandeur of her new position; but earthly glory is short – lived, she dies, leaving behind a helpless babe and an inconsolable husband … 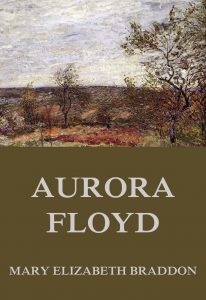 Born in London, Mary Elizabeth Braddon was privately educated. Her mother Fanny separated from her father Henry in 1840, when Mary was five. When Mary was ten years old, her brother Edward Braddon left for India and later Australia, where he became Premier of Tasmania. Mary worked as an actress for three years in order to support herself and her mother.

In 1860, Mary met John Maxwell (1824–1895), a publisher of periodicals. She started living with him in 1861. However, Maxwell was already married with five children, and his wife was living in an asylum in Ireland. Mary acted as stepmother to his children until 1874, when Maxwell’s wife died and they were able to get married. She had six children by him, including the novelist William Babington Maxwell.

Braddon was a prolific writer, producing more than 80 novels with inventive plots. The most famous is Lady Audley’s Secret (1862), which won her recognition, and a fortune as a bestseller. It has remained in print since its publication and been dramatised and filmed several times. R. D. Blackmore’s anonymous sensation novel Clara Vaughan (1864) was wrongly attributed to her by some critics.

Braddon wrote several works of supernatural fiction, including the pact with the devil story Gerald, or the World, the Flesh and the Devil (1891), and the ghost stories “The Cold Embrace”, “Eveline’s Visitant” and “At Chrighton Abbey”. From the 1930s onwards, these stories were often anthologised in collections such as Montague Summers’s The Supernatural Omnibus (1931) and Fifty Years of Ghost Stories (1935). Braddon’s legacy is tied to the sensation fiction of the 1860s.

Braddon also founded Belgravia magazine (1866), which presented readers with serialised sensation novels, poems, travel narratives and biographies, as well as essays on fashion, history and science. The magazine was accompanied by lavish illustrations and offered readers a source of literature at an affordable cost. She also edited Temple Bar magazine.

She died on 4 February 1915 in Richmond (at the time a suburb of Surrey but now part of Greater London), and is interred in Richmond Cemetery. Her home had been Lichfield House in the centre of then town, which was replaced by a block of flats in 1936, Lichfield Court, now listed. She has a plaque in Richmond parish church which calls her simply ‘Miss Braddon’. A number of streets in the area are named after characters in her novels – her husband was a property developer in the area.

There is a critical essay on Braddon’s work in Michael Sadleir’s book Things Past (1944). In 2014 the Mary Elizabeth Braddon Association was founded to pay tribute to Braddon’s life and work.