Boat Life in Egypt and Nubia

An indispensable talent or element in a writer of a book of travels is so to present every scene and object described that every reader shall seem to be present and go along with the traveler and see everything he sees and through the same eyes. The author of this book has this very desirable element of an agreeable traveler. He has enthusiasm. He has two eyes. They are both wide awake. He sees every thing seeable. His descriptions are graphic, graceful, and mirror-like, into which the reader looks and sees first the traveler himself in the foreground of the picture. Then he sees the Nile, the boat, the shores, the cities, the numerous and varied objects, moving and stationary, living and dead, passing like a panorama before the mind’s eye, all the way up the Nile from Alexandria to Nubia, and back again. You seem to hear his voice describing the objects as they pass. … Some may think there are a goodly number of idiosyncrasies. But we like to see and keep an eye on the man we are traveling with, even if we are five thousand miles apart. We advise those who would enjoy a pleasant sail up the Nile to Nubia, without its fatigues and exposures, to buy Mr. Prime’s book, and borrow his eyes with which to see the scenes and objects so graphically described. 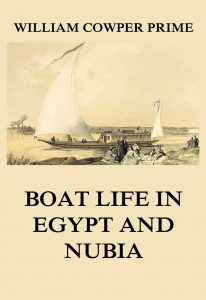 Boat Life in Egypt and Nubia

Boat Life in Egypt and Nubia.