The story is a dramatic episode of the revolt of the blacks of St. Domingo in 1791. Bug-Jargal, the hero, is a negro, a slave in the household of a planter. He is secretly in love with his master’s daughter, a poetic child, betrothed to her cousin, Leopold d’Auverney. The latter saves the life of Bug-Jargal, who is condemned to death for an act of rebellion. When the great revolt breaks out, and the whole island is in flames, Bug-Jargal protects the young girl, and saves the life of her lover. He even conducts D’Auverney to her he loves, and then, in the fullness of sublime abnegation, he surrenders himself to the whites, who shoot him dead. 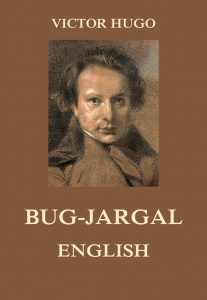 The Writings of Victor Hugo (from Wikipedia):

Like many young writers of his generation, Hugo was profoundly influenced by François-René de Chateaubriand, the famous figure in the literary movement of Romanticism and France’s pre-eminent literary figure during the early 19th century. In his youth, Hugo resolved to be “Chateaubriand or nothing”, and his life would come to parallel that of his predecessor in many ways. Like Chateaubriand, Hugo furthered the cause of Romanticism, became involved in politics (though mostly as a champion of Republicanism), and was forced into exile due to his political stances.

The precocious passion and eloquence of Hugo’s early work brought success and fame at an early age. His first collection of poetry (Odes et poésies diverses) was published in 1822 when he was only 20 years old and earned him a royal pension from Louis XVIII. Though the poems were admired for their spontaneous fervour and fluency, the collection that followed four years later in 1826 (Odes et Ballades) revealed Hugo to be a great poet, a natural master of lyric and creative song.

Victor Hugo’s first mature work of fiction was first published in February 1829 by Charles Gosselin without the author’s name and reflected the acute social conscience that would infuse his later work. Le Dernier jour d’un condamné (The Last Day of a Condemned Man) would have a profound influence on later writers such as Albert Camus, Charles Dickens, and Fyodor Dostoyevsky. Claude Gueux, a documentary short story about a real-life murderer who had been executed in France. On 15 March 1832, Hugo completed this story with a long preface and his signature which was later considered by Hugo himself to be a precursor to his great work on social injustice, Les Misérables.

Hugo became the figurehead of the romantic literary movement with the plays Cromwell (1827) and Hernani (1830).

Hugo’s novel Notre-Dame de Paris (The Hunchback of Notre-Dame) was published in 1831 and quickly translated into other languages across Europe. One of the effects of the novel was to shame the City of Paris into restoring the much-neglected Cathedral of Notre Dame, which was attracting thousands of tourists who had read the popular novel. The book also inspired a renewed appreciation for pre-Renaissance buildings, which thereafter began to be actively preserved.

Hugo began planning a major novel about social misery and injustice as early as the 1830s, but a full 17 years were needed for Les Misérables to be realised and finally published in 1862. Hugo had used the departure of prisoners for the Bagne of Toulon in one of his early stories, “Le Dernier Jour d’un condamné” He went to Toulon to visit the Bagne in 1839 and took extensive notes, though he did not start writing the book until 1845. On one of the pages of his notes about the prison, he wrote in large block letters a possible name for his hero: ” JEAN TRÉJEAN”. When the book was finally written, Tréjean became Jean Valjean.

Hugo was acutely aware of the quality of the novel, as evidenced in a letter he wrote to his publisher, Albert Lacroix, on 23 March 1862, “My conviction is that this book is going to be one of the peaks , if not the crowning point of my work.” [7] So publication of the Miserables went to the highest bidder. The Belgian publishing house Lacroix and Verboeckhoven undertook a marketing campaign unusual for the time, issuing press releases about the work a full six months before the launch. It also initially published only the first part of the novel (“Fantine”), which was launched simultaneously in major cities. Instalments of the book sold out within hours and had enormous impact on French society.

The critical establishment was generally hostile to the novel; Taine found it insincere, Barbey d’Aurevilly complained of its vulgarity, Gustave Flaubert found within it “neither truth nor greatness”, the Goncourt brothers lambasted its artificiality, and Baudelaire – despite giving favourable reviews in newspapers – castigated it in private as “repulsive and inept”. Les Misérables proved popular enough with the masses that the issues it highlighted were soon on the agenda of the National Assembly of France. Today, the novel remains his most enduringly popular work. It is popular worldwide and has been adapted for cinema, television, and stage shows.

An apocryphal tale about the shortest correspondence in history is said to have been between Hugo and his publisher Hurst and Blackett in 1862. Hugo was on vacation when Les Misérables was published. He queried the reaction to the work by sending a single-character telegram to his publisher, asking ?. The publisher replied with a single ! to indicate its success.

Hugo turned away from social/political issues in his next novel, Les Travailleurs de la Mer (Toilers of the Sea), published in 1866. The book was well received, perhaps due to the previous success of Les Misérables. Dedicated to the channel island of Guernsey, where he spent 15 years of exile, Hugo tells of a man who attempts to win the approval of his beloved’s father by rescuing his ship, intentionally marooned by its captain who hopes to escape with a treasure of money it is transporting, through an exhausting battle of human engineering against the force of the sea and a battle against an almost mythical beast of the sea, a giant squid. Superficially an adventure, one of Hugo’s biographers calls it a “metaphor for the 19th century–technical progress, creative genius and hard work overcoming the immanent evil of the material world.”

The word used in Guernsey to refer to squid (pieuvre, also sometimes applied to octopus) was to enter the French language as a result of its use in the book. Hugo returned to political and social issues in his next novel, L’Homme Qui Rit (The Man Who Laughs), which was published in 1869 and painted a critical picture of the aristocracy. The novel was not as successful as his previous efforts, and Hugo himself began to comment on the growing distance between himself and literary contemporaries such as Flaubert and Émile Zola, whose realist and naturalist novels were now exceeding the popularity of his own work.

His last novel, Quatre-vingt-treize (Ninety-Three), published in 1874, dealt with a subject that Hugo had previously avoided: the Reign of Terror during the French Revolution. Though Hugo’s popularity was on the decline at the time of its publication, many now consider Ninety-Three to be a work on par with Hugo’s better-known novels.