The tragedy Cato was written by Joseph Addison in 1712 and recounts the last days of Marcus Porcius Cato Uticensis, a Stoic who was always resistant to Julius Caesar’s tyranny and an icon of republicanism, virtue, and liberty. The main themes of the play are individual liberty versus government tyranny and Cato’s personal struggle to hold to his beliefs in the face of death. 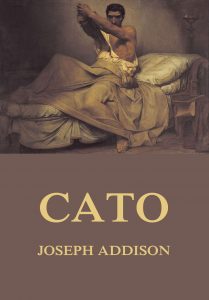 In 1712, Addison wrote his most famous work of fiction, Cato, a Tragedy. Based on the last days of Marcus Porcius Cato Uticensis, it deals with such themes as individual liberty versus government tyranny, Republicanism versus Monarchism, logic versus emotion, and Cato’s personal struggle to cleave to his beliefs in the face of death. It has a prologue written by Alexander Pope and an epilogue by Dr. Garth.

The play was a success throughout Britain and its possessions in the New World, as well as Ireland. It continued to grow in popularity, especially in the American colonies, for several generations. Indeed, it was almost certainly literary inspiration for the American Revolution, being well known to many of the Founding Fathers. In fact, George Washington had it performed for the Continental Army while they were encamped at Valley Forge. Among the founders, according to John J. Miller, “no single work of literature may have been more important than Cato”.

Some scholars have identified the inspiration for several famous quotations from the American Revolution in Cato. These include:

Though the play has fallen from popularity and is now rarely performed, it was widely popular and often cited in the eighteenth century, with Cato as an exemplar of republican virtue and liberty. For example, John Trenchard and Thomas Gordon were inspired by the play to write a series of letters, Cato’s Letters on individual rights, using the name “Cato”.

The action of the play involves the forces of Cato at Utica, awaiting the arrival of Caesar just after Caesar’s victory at Thapsus (46 BC). The noble sons of Cato, Portius and Marcus, are both in love with Lucia, the daughter of Lucius, a senatorial ally of Cato. Juba, prince of Numidia, another fighting on Cato’s side, loves Cato’s daughter Marcia. Meanwhile, Sempronius, another senator, and Syphax, general of the Numidians, are conspiring secretly against Cato, hoping to draw off the Numidian army from supporting him. In the final act, Cato commits suicide, leaving his supporters to make their peace with the approaching Caesar—an easier task after Cato’s death, since he has been Caesar’s most implacable foe.