Christmas Every Day (And Other Stories)

Christmas Every Day (And Other Stories) – William Dean Howells

There is rare fun and freshness in Mr. W. D. Howells’s. ‘Christmas Every Day, and Other Stories’, a little volume charming for New Year or Thanksgiving. It is redolent, indeed, of all these, especially of November sweets, when turkey and cranberry sauce crown the board and pumpkin-pies smile saucily from its end. Mr. Howells shows in these tales an unexpected tenderness lurking in a corner of his capacious heart –a tenderness for children under a veil of humor that is particularly attractive and also a grotesque yet merry fancy which cannot fail to delight them. What a delightful world is the child’s world and how few there be that enter it! Mr. Howells ‘ touch is so light, so playful, so understanding, that it is a shame not to tickle childhood with it as this book does. The art of being-grand-père is as rare as the true moonstone. We won’t spoil the feast by describing the bill-of fare, but happy infant that gets ‘Christmas Every Day’ like this. 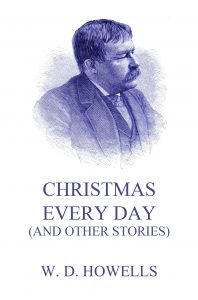 Christmas Every Day (And Other Stories).

Christmas Every Day (And Other Stories).

The little girl came into her papa’s study, as she always did Saturday morning before breakfast, and asked for a story. He tried to beg off that morning, for he was very busy, but she would not let him. So he began:

“Well, once there was a little pig—”

She put her hand over his mouth and stopped him at the word. She said she had heard little pig-stories till she was perfectly sick of them.

“Well, what kind of story shall I tell, then?”

“About Christmas. It’s getting to be the season. It’s past Thanksgiving already.”

“It seems to me,” her papa argued, “that I’ve told as often about Christmas as I have about little pigs.”

“No difference! Christmas is more interesting.”

“Well!” Her papa roused himself from his writing by a great effort. “Well, then, I’ll tell you about the little girl that wanted it Christmas every day in the year. How would you like that?”

“First-rate!” said the little girl; and she nestled into comfortable shape in his lap, ready for listening.

“Very well, then, this little pig—Oh, what are you pounding me for?”

“Because you said little pig instead of little girl.”

“I should like to know what’s the difference between a little pig and a little girl that wanted it Christmas every day!”

“Papa,” said the little girl, warningly, “if you don’t go on, I’ll give it to you!” And at this her papa darted off like lightning, and began to tell the story as fast as he could.

Well, once there was a little girl who liked Christmas so much that she wanted it to be Christmas every day in the year; and as soon as Thanksgiving was over she began to send postal-cards to the old Christmas Fairy to ask if she mightn’t have it. But the old fairy never answered any of the postals; and after a while the little girl found out that the Fairy was pretty particular, and wouldn’t notice anything but letters—not even correspondence cards in envelopes; but real letters on sheets of paper, and sealed outside with a monogram—or your initial, anyway. So, then, she began to send her letters; and in about three weeks—or just the day before Christmas, it was—she got a letter from the Fairy, saying she might have it Christmas every day for a year, and then they would see about having it longer.

The little girl was a good deal excited already, preparing for the old-fashioned, once-a-year Christmas that was coming the next day, and perhaps the Fairy’s promise didn’t make such an impression on her as it would have made at some other time. She just resolved to keep it to herself, and surprise everybody with it as it kept coming true; and then it slipped out of her mind altogether.

She had a splendid Christmas. She went to bed early, so as to let Santa Claus have a chance at the stockings, and in the morning she was up the first of anybody and went and felt them, and found hers all lumpy with packages of candy, and oranges and grapes, and pocket-books and rubber balls, and all kinds of small presents, and her big brother’s with nothing but the tongs in them, and her young lady sister’s with a new silk umbrella, and her papa’s and mamma’s with potatoes and pieces of coal wrapped up in tissue-paper, just as they always had every Christmas. Then she waited around till the rest of the family were up, and she was the first to burst into the library, when the doors were opened, and look at the large presents laid out on the library-table—books, and portfolios, and boxes of stationery, and breastpins, and dolls, and little stoves, and dozens of handkerchiefs, and ink-stands, and skates, and snow-shovels, and photograph-frames, and little easels, and boxes of water-colors, and Turkish paste, and nougat, and candied cherries, and dolls’ houses, and waterproofs—and the big Christmas-tree, lighted and standing in a waste-basket in the middle.

She had a splendid Christmas all day. She ate so much candy that she did not want any breakfast; and the whole forenoon the presents kept pouring in that the expressman had not had time to deliver the night before; and she went round giving the presents she had got for other people, and came home and ate turkey and cranberry for dinner, and plum-pudding and nuts and raisins and oranges and more candy, and then went out and coasted, and came in with a stomach-ache, crying; and her papa said he would see if his house was turned into that sort of fool’s paradise another year; and they had a light supper, and pretty early everybody went to bed cross.

Here the little girl pounded her papa in the back, again.

“No matter; you oughtn’t to put it into a story.”

Her father went on:

The little girl slept very heavily, and she slept very late, but she was wakened at last by the other children dancing round her bed with their stockings full of presents in their hands.

“What is it?” said the little girl, and she rubbed her eyes and tried to rise up in bed.

“Nonsense! It was Christmas yesterday.”

Her brothers and sisters just laughed. “We don’t know about that. It’s Christmas to-day, anyway. You come into the library and see.”

Then all at once it flashed on the little girl that the Fairy was keeping her promise, and her year of Christmases was beginning. She was dreadfully sleepy, but she sprang up like a lark—a lark that had overeaten itself and gone to bed cross—and darted into the library. There it was again! Books, and portfolios, and boxes of stationery, and breastpins—

“You needn’t go over it all, papa; I guess I can remember just what was there,” said the little girl.

Well, and there was the Christmas-tree blazing away, and the family picking out their presents, but looking pretty sleepy, and her father perfectly puzzled, and her mother ready to cry. “I’m sure I don’t see how I’m to dispose of all these things,” said her mother, and her father said it seemed to him they had had something just like it the day before, but he supposed he must have dreamed it. This struck the little girl as the best kind of a joke; and so she ate so much candy she didn’t want any breakfast, and went round carrying presents, and had turkey and cranberry for dinner, and then went out and coasted, and came in with a—

“What did you promise, you forgetful thing?”

Well, the next day, it was just the same thing over again, but everybody getting crosser; and at the end of a week’s time so many people had lost their tempers that you could pick up lost tempers anywhere; they perfectly strewed the ground. Even when people tried to recover their tempers they usually got somebody else’s, and it made the most dreadful mix.

The little girl began to get frightened, keeping the secret all to herself; she wanted to tell her mother, but she didn’t dare to; and she was ashamed to ask the Fairy to take back her gift, it seemed ungrateful and ill-bred, and she thought she would try to stand it, but she hardly knew how she could, for a whole year. So it went on and on, and it was Christmas on St. Valentine’s Day and Washington’s Birthday, just the same as any day, and it didn’t skip even the First of April, though everything was counterfeit that day, and that was some little relief.

After a while coal and potatoes began to be awfully scarce, so many had been wrapped up in tissue-paper to fool papas and mammas with. Turkeys got to be about a thousand dollars apiece—