Christmas in Ritual and Tradition

Christmas in Ritual and Tradition – Clement A. Miles

This volume tries to show how Christmas is or has been kept in various lands and ages, and to trace as far as possible the origin of the pagan elements that have mingled with the Church’s feast of the Nativity. It is full of bits of little-known Christmas lore and its aim is to build a rough outline map of the field of Christmas customs, and to bring together materials hitherto scattered through a multitude of volumes in various languages. 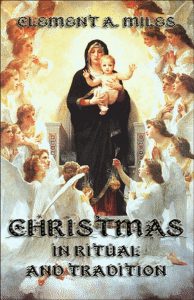 Christmas in Ritual and Tradition

Christmas in Ritual and Tradition.