Who could possibly have foreseen that the author of “Typee” and “Omoo” would at last appear as the author of a poem of 18,000 lines, inspired by religious doubts, questions and aspirations? That Mr. Melville has a vein of native poetry in his nature was already manifested by some ballads which he published during the civil war; but it still remains an amazement that the hero of whaling and Polynesian adventures had become a theological mystic in his ripened years. The plot of Clarel has been constructed as a frame upon which to hang descriptions of the scenery of Palestine and the theological discussions of a chance company of tourists. The principal characters are an American student, an English clergyman, a Jew, a Smyrniote Greek and a Jewish girl of whom we see little, as she dies in order to introduce a tragic element. The poem is divided into four parts, respectively entitled: Jerusalem, The Wilderness, Mar Saba and Bethlehem. 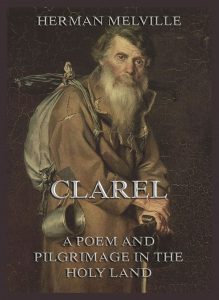 Clarel: A Poem and Pilgrimage in the Holy Land.

Plot Summary of Clarel (from Wikipedia):

Clarel, a young theology student whose belief has begun to waver, travels to Jerusalem to renew his faith in the sites and scenes of Jesus Christ’s mortal ministry. He stays in a hostel run by Abdon, the Black Jew — a living representation of Jerusalem. Clarel is initially amazed by the religious diversity of Jerusalem; he sees Jews, Protestants, Catholics, Muslims, Hindus and Buddhists walking its streets and recognizes their common faith in divinity. Clarel also senses a kinship with an Italian youth and Catholic doubter named Celio, whom he sees walking in the distance, but does not take the initiative and greet him. When Celio dies shortly thereafter, Clarel feels he may have passed up an opportunity to regain his faith.

While walking through Jerusalem’s streets, Clarel meets Nehemiah, a Christian who hands out proselytizing tracts to pilgrims and tourists. Nehemiah becomes Clarel’s guide and shows him the sights of Jerusalem. At the Wailing Wall, Clarel notices an American Jew and his daughter, whom he learns are Agar and Ruth. Nehemiah later introduces Clarel to Ruth, with whom he falls in love. But Jewish custom and a jealous rabbi keep Clarel and Ruth apart much of the time, so the student continues sightseeing with Nehemiah.

In Gethsemane, Clarel meets Vine and Rolfe, two opposites. Rolfe is a Protestant and religious skeptic who historicizes Jerusalem and calls into question Christ’s claim to divinity. Vine is a quiet man whose example leads Clarel to hope for faith — at least initially. When Vine and Rolfe decide to take a tour of other important sites in the Holy Land — the wilderness where John the Baptist preached, the monastery at Mar Saba and Bethlehem — Clarel wants to accompany them, but he does not wish to leave Ruth.

At this critical juncture, Ruth’s father Nathan dies. As Jewish customs prohibit Clarel’s presence, so the student decides to take the journey, confident that he will see his beloved when he returns to Jerusalem. The night before his departure, he sees a frieze depicting the death of a young bride, which makes him pause with foreboding. He banishes his doubts and sets off on his pilgrimage.

Clarel travels with a wide range of fellow pilgrims — Nehemiah, Rolfe and Vine accompany him, and Melville introduces new characters for this book: Djalea, son of an emir, turned tour guide; Belex, the leader of six armed guards protecting the pilgrimage; a Greek banker and his son-in-law Glaucon; a Lutheran minister named Derwent; an unnamed former elder who has lost the faith; and a Swedish Jew named Mortmain, whose black skull cap constantly forebodes ill. The tour through the desert starts with an explicit invitation to compare Clarel and his companions’ journey to “brave Chaucer’s” pilgrims to Canterbury.

Unaccustomed to desert hardships, the banker and his son-in-law soon abandon the group for a caravan headed back to Jerusalem. When Clarel and his companions come to the stretch of road where Christ’s good Samaritan rescued a Jew from robbers, the taciturn elder also departs, scoffing at the cautions of Djalea and Belex, who fear robbers. Mortmain is the final deserter; he leaves before the party makes a stop at Jericho, refusing to enter a city he considers wicked. During their travels, Clarel’s party is joined by Margoth, an apostate Jewish geologist who scoffs at the faith expressed by Derwent, As an atheist, Margoth prompts Rolfe to move closer to Derwent’s faith than he had formerly been. The company also speaks briefly with a Dominican monk traveling through the desert.

In the absence of these travelers, Derwent and Rolfe engage in a number of heated debates as to the veracity of biblical accounts and the relationship between the various Protestant sects. Derwent staunchly maintains his faith in biblical accuracy, while Rolfe questions the Holy Book’s basis as factual history even as he acknowledges his desire to believe. Clarel eagerly listens to these conversations but rarely participates, unsure of whether his faith is being shored up or torn down by the debates. He seeks Vine out for companionship, but Vine’s stoic silence resists interpretation, and Vine denies Clarel’s request for more open talk.

When the party arrives at the Dead Sea, they make camp, and are rejoined by Mortmain. Seeming disturbed, he drinks the salty Dead Sea water despite warnings that it is poisonous. Mortmain survives but, when the pilgrims wake in the morning, they discover that Nehemiah has died in the night. He saw a vision of John’s heavenly city in the air, above the ruins of Sodom and Gomorrah. While the company buries the man by the Dead Sea, Clarel looks out over the water. He sees a faint rainbow, which seems to offer hope as it did for Noah, but the bow “showed half spent —/Hovered and trembled, paled away, and — went”.

Clarel and the other pilgrims travel to the Greek Orthodox monastery of Mar Saba, where one St. Saba discovered a fountain in the desert and planted a palm tree now more than one thousand years old. On their way to the monastery, they meet a young man from Cyprus who has just left Mar Saba and is traveling to the Dead Sea. The Cypriot’s faith is unshaken, and all who hear his singing envy him. On their way to Mar Saba, the travelers pass through the “tents of Kedar,” where a band of robbers camp and exact a toll of travelers to the monastery. These robbers recognize Arab royalty in Djalea, however, and let the pilgrims pass without molesting them.

At Mar Saba, Clarel and his friends are fed by the monks and entertained with a masque portraying the story of Cataphilus, a wandering Jew. Hearing Cataphilus described as having lost his faith “and meriteth no ruth,” Clarel thinks he resembles the Jew. The monks leave the group with Lesbos, a Muslim merchant visiting the monastery. Lesbos leads the group in a drunken revel, persuading even the staid Derwent to participate. He also introduces the group to Agath, another visitor at Mar Saba, a Greek sailor who was sent to Mar Saba to recover after being attacked in the Judean desert, similarly to the wounded Jew in Christ’s parable of the Good Samaritan. Reminiscent of Melville’s novels such as White-Jacket and Moby-Dick, Agath and Lesbos tell several sea stories to Clarel, who listens attentively to the tales.

In conversations among the pilgrims and monks, Clarel learns that no one has faith—not Vine, Rolfe, Belex, Lesbos—nor Derwent, whose professions until this point had been staunch. After confessing his lack of faith to Clarel, Derwent takes a tour of the monastery. He cannot appreciate the monks’ faith; he scoffs at the holy relics showed him by the abbot, considers several of the monks to be insane, and cannot believe that the holy palm tree is either holy or a thousand years old. When he takes his eyes from the palm, Derwent sees Mortmain’s skull cap flutter down from an outcropping where the Jew is observing the palm.

All of the pilgrims fall asleep looking at the palm tree. In the morning, when the caravan is about to leave, Mortmain is missing. They find him on the outcropping, his glassy, dead eyes fixed on the palm tree. The monks bury the Jew outside the monastery, in an unconsecrated grave, “Where vulture unto vulture calls, / And only ill things find a friend.”

When the pilgrims leave Mar Saba, they take Lesbos and Agath with them. After a short distance, Lesbos turns back and returns to the monastery, giving the pilgrims a military salute. Ungar, a new traveling companion, joins the company. A veteran of the American Civil War, he is descended from Catholic colonists and American Indians, and is the only one among them with faith. This new group travels to Bethlehem together. Once in Bethlehem, Agath leaves to join a new caravan. The remaining pilgrims pay Djaleal and Belex for their services in guiding them through the desert.

Ungar’s faith attracts Clarel. Derwent is antagonized by his insistence that man is “fallen” and cannot reclaim his lost glory without divine aid. Their debates over human nature and religion reach to the morality of democracy and capitalism. Vine, Rolfe and Clarel, all Americans, take Ungar’s part, leaving the Englishman to believe that they argue with him out of prejudice against the Old World.

In Bethlehem, the group is shown the cave where Christ was born by a young Franciscan monk named Salvaterra (save the earth in Italian). He seems almost divine to them, as if he were a reincarnation of St. Francis. The monk inspires Clarel’s faith. Clarel’s faith is strengthened after his time with Ungar and Salvaterra, and he views the setting sun as an inspiring beacon.

Ungar leaves the group and Salvaterra remains in the monastery, leaving Clarel to grapple alone with his fledgling faith. He returns to Jerusalem hopeful, eager to rescue Ruth and Agar from their exile in Palestine, and return with them both to the United States. As Clarel approaches Jerusalem during the night before Ash Wednesday, he meets a Jewish burial party. In his absence, Ruth and Agar have died. His newfound faith is rocked to its depths. All through the rituals of Holy Week, Clarel waits for a miracle: for Ruth to return from the dead as Christ did. But Easter passes without Ruth’s resurrection. Clarel is left a lone man in Jerusalem, wondering why, though “They wire the world—far under sea / They talk; but never comes to me / A message from beneath the stone.”

The last canto of Clarel, the epilogue, offers Melville’s commentary on the existential crisis of faith suffered by Clarel in the wake of Ruth’s death. Though Clarel remains beset by troubles and doubts, Melville offers the poem as an exordium to faith:

“Then keep thy heart, though yet but ill-resigned—

Clarel, thy heart, the issues there but mind;
That like the crocus budding through the snow—
That like a swimmer rising from the deep—
That like a burning secret which doth go
Even from the bosom that would hoard and keep;
Emerge thou mayst from the last whelming sea,

And prove that death but routs life into victory.”