Eight Cousins, Or The Aunt Hill

Eight Cousins, Or The Aunt Hill – Louisa May Alcott

The story tells how Rose, who has been recently orphaned and must now reside with her maiden great aunts, one of the most winning heroines in juvenile fiction, and her seven boy cousins, get into scrapes, mischief and all kinds of fun. Like many of Alcott’s books for young people, this story sometimes takes a high moral tone, too. 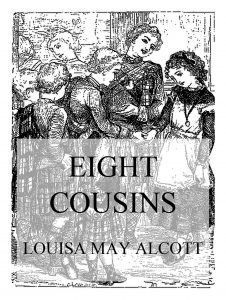 Eight Cousins, Or The Aunt Hill.

Eight Cousins, Or The Aunt Hill.

Rose sat all alone in the big best parlor, with her little handkerchief laid ready to catch the first tear, for she was thinking of her troubles, and a shower was expected. She had retired to this room as a good place in which to be miserable; for it was dark and still, full of ancient furniture, sombre curtains, and hung all round with portraits of solemn old gentlemen in wigs, severe-nosed ladies in top-heavy caps, and staring children in little bob-tailed coats or short-waisted frocks. It was an excellent place for woe; and the fitful spring rain that pattered on the window-pane seemed to sob, “Cry away: I’m with you.”

Rose really did have some cause to be sad; for she had no mother, and had lately lost her father also, which left her no home but this with her great-aunts. She had been with them only a week, and, though the dear old ladies had tried their best to make her happy, they had not succeeded very well, for she was unlike any child they had ever seen, and they felt very much as if they had the care of a low-spirited butterfly.

They had given her the freedom of the house, and for a day or two she had amused herself roaming all over it, for it was a capital old mansion, and was full of all manner of odd nooks, charming rooms, and mysterious passages. Windows broke out in unexpected places, little balconies overhung the garden most romantically, and there was a long upper hall full of curiosities from all parts of the world; for the Campbells had been sea-captains for generations.

Aunt Plenty had even allowed Rose to rummage in her great china closet,—a spicy retreat, rich in all the “goodies” that children love; but Rose seemed to care little for these toothsome temptations; and when that hope failed, Aunt Plenty gave up in despair.

Gentle Aunt Peace had tried all sorts of pretty needle-work, and planned a doll’s wardrobe that would have won the heart of even an older child. But Rose took little interest in pink satin hats and tiny hose, though she sewed dutifully till her aunt caught her wiping tears away with the train of a wedding-dress, and that discovery put an end to the sewing society.

Then both old ladies put their heads together and picked out the model child of the neighborhood to come and play with their niece. But Annabel Bliss was the worst failure of all, for Rose could not bear the sight of her, and said she was so like a wax doll she longed to give her a pinch and see if she would squeak. So prim little Annabel was sent home, and the exhausted aunties left Rose to her own devices for a day or two.

Bad weather and a cold kept her in-doors, and she spent most of her time in the library where her father’s books were stored. Here she read a great deal, cried a little, and dreamed many of the innocent bright dreams in which imaginative children find such comfort and delight. This suited her better than any thing else, but it was not good for her, and she grew pale, heavy-eyed, and listless, though Aunt Plenty gave her iron enough to make a cooking-stove, and Aunt Peace petted her like a poodle.

Seeing this, the poor aunties racked their brains for a new amusement, and determined to venture a bold stroke, though not very hopeful of its success. They said nothing to Rose about their plan for this Saturday afternoon, but let her alone till the time came for the grand surprise, little dreaming that the odd child would find pleasure for herself in a most unexpected quarter.

Before she had time to squeeze out a single tear a sound broke the stillness, making her prick up her ears. It was only the soft twitter of a bird, but it seemed to be a peculiarly gifted bird, for while she listened the soft twitter changed to a lively whistle, then a trill, a coo, a chirp, and ended in a musical mixture of all the notes, as if the bird burst out laughing. Rose laughed also, and, forgetting her woes, jumped up, saying eagerly,—

Running down the long hall, she peeped out at both doors, but saw nothing feathered except a draggle-tailed chicken under a burdock leaf. She listened again, and the sound seemed to be in the house. Away she went, much excited by the chase, and following the changeful song it led her to the china-closet door.

“In there? How funny!” she said. But when she entered, not a bird appeared except the everlastingly kissing swallows on the Canton china that lined the shelves. All of a sudden Rose’s face brightened, and, softly opening the slide, she peered into the kitchen. But the music had stopped, and all she saw was a girl in a blue apron scrubbing the hearth. Rose stared about her for a minute, and then asked abruptly,—

“Did you hear that mocking-bird?”

“I should call it a phebe-bird,” answered the girl, looking up with a twinkle in her black eyes.

“Oh, yes! I’ll come in.” And Rose crept through the slide to the wide shelf on the other side, being too hurried and puzzled to go round by the door.

The girl wiped her hands, crossed her feet on the little island of carpet where she was stranded in a sea of soap-suds, and then, sure enough, out of her slender throat came the swallow’s twitter, the robin’s whistle, the blue-jay’s call, the thrush’s song, the wood-dove’s coo, and many another familiar note, all ending as before with the musical ecstasy of a bobolink singing and swinging among the meadow grass on a bright June day.

Rose was so astonished that she nearly fell off her perch, and when the little concert was over clapped her hands delightedly.

“The birds,” answered the girl, with a smile, as she fell to work again.

“It is very wonderful! I can sing, but nothing half so fine as that. What is your name, please?”

“I’ve heard of phebe-birds; but I don’t believe the real ones could do that,” laughed Rose, adding, as she watched with interest the scattering of dabs of soft soap over the bricks, “May I stay and see you work? It is very lonely in the parlor.”

“Yes, indeed, if you want to,” answered Phebe, wringing out her cloth in a capable sort of way that impressed Rose very much.

“It must be fun to swash the water round and dig out the soap. I’d love to do it, only aunt wouldn’t like it, I suppose,” said Rose, quite taken with the new employment.

“You’d soon get tired, so you’d better keep tidy and look on.”

“I suppose you help your mother a good deal?”

“I’m going to live here, I hope. Debby wants some one to help round, and I’ve come to try for a week.”

“I hope you will stay, for it is very dull,” said Rose, who had taken a sudden fancy to this girl, who sung like a bird and worked like a woman.

“Hope I shall; for I’m fifteen now, and old enough to earn my own living. You have come to stay a spell, haven’t you?” asked Phebe, looking up at her guest and wondering how life could be dull to a girl who wore a silk frock, a daintily frilled apron, a pretty locket, and had her hair tied up with a velvet snood.

“Yes, I shall stay till my uncle comes. He is my guardian now, and I don’t know what he will do with me. Have you a guardian?”

“My sakes, no! I was left on the poor-house steps a little mite of a baby, and Miss Rogers took a liking to me, so I’ve been there ever since. But she is dead now, and I take care of myself.”

“How interesting! It is like Arabella Montgomery in the ‘Gypsy’s Child.’ Did you ever read that sweet story?” asked Rose, who was fond of tales of foundlings, and had read many.

“I don’t have any books to read, and all the spare time I get I run off into the woods; that rests me better than stories,” answered Phebe, as she finished one job and began on another.

Rose watched her as she got out a great pan of beans to look over, and wondered how it would seem to have life all work and no play. Presently Phebe seemed to think it was her turn to ask questions, and said, wistfully,—

“You’ve had lots of schooling, I suppose?”

“Oh, dear me, yes! I’ve been at boarding-school nearly a year, and I’m almost dead with lessons. The more I got, the more Miss Power gave me, and I was so miserable I ‘most cried my eyes out. Papa never gave me hard things to do, and he always taught me so pleasantly I loved to study. Oh, we were so happy and so fond of one another! But now he is gone, and I am left all alone.”

The tear that would not come when Rose sat waiting for it came now of its own accord,—two of them in fact,—and rolled down her cheeks, telling the tale of love and sorrow better than any words could do it.

For a minute there was no sound in the kitchen but the little daughter’s sobbing and the sympathetic patter of the rain. Phebe stopped rattling her beans from one pan to the other, and her eyes were full of pity as they rested on the curly head bent down on Rose’s knee, for she saw that the heart under the pretty locket ached with its loss, and the dainty apron was used to dry sadder tears than any she had ever shed.

Somehow, she felt more contented with her brown calico gown and blue-checked pinafore; envy changed to compassion; and if she had dared she would have gone and hugged her afflicted guest.

Fearing that might not be considered proper, she said, in her cheery voice,—