Encyclopedia Of Freemasonry And Its Kindred Sciences Volume 3: M-R

Dr. Albert G. Mackey appears as author of this ” Encyclopedia of Freemasonry and its Kindred Sciences,” which, being a library in inself, superseded most of the Masonic works which have been tolerated by the craft — chiefly because none better could be obtained. Here is a work which fulfils the hope which sustained the author through ten years’ literary labor, that, under one cover he “would furnish every Mason who might consult its pages the means of acquiring a knowledge of all matters connected with the science, the philosophy, and the history of his order.”

Up to the present time the modern literature of Freemasonry has been diffuse, lumbering, unreliable, and, out of all reasonable proportions. There is, in Mackey’s “Encyclopaedia of Masonry,” well digested, well arranged, and confined within reasonable limits, all that a Mason can desire to find in a book exclusively devoted to the history, the arts, science, and literature of Masonry.

This is volume three out of four and covering the letters M to R. 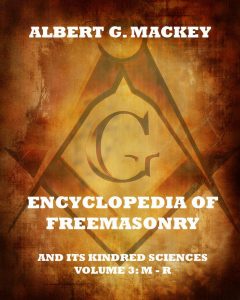 Encyclopedia Of Freemasonry And Its Kindred Sciences Volume 3: M-R

Encyclopedia Of Freemasonry And Its Kindred Sciences Volume 3: M-R.