Cecil Edward Chesterton was the brother of G.K. Chesterton, a journalist and political commentator throughout his short life of only 39 years. His biography of his better-known brother was first published anonymously, but it did not take long to discover the real author. 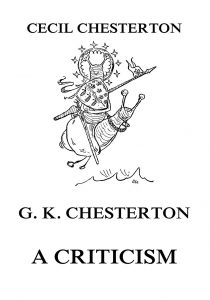 Biography of Cecil Chesterton (from wikipedia.com)

He was the younger brother of G. K. Chesterton, and a close associate of Hilaire Belloc. While the ideas of distributism came from all three, and Arthur Penty, he was the most ideological and combative by temperament. His death, according to his widow, removed the theorist of the movement.

He was born in Kensington, London, and educated at St Paul’s School, then worked for a small publisher for a time. He then qualified as surveyor and estate agent, with a view to entering his father’s business, which is still flourishing today. In 1901 he joined the Fabian Society, with which he was closely involved for about six years. From 1907 he wrote for A. R. Orage’s The New Age. In 1908 he published an anonymous biography of his better-known brother, G. K. Chesterton, a Criticism, but his authorship was quickly discovered.

He had been one of the ‘Anti-Puritan League’ of the 1890s, with Stewart Headlam (who stood bail for Oscar Wilde), Edgar Jepson and his brother; and then a member of Henry Holland’s Christian Social Union. While Chesterton was writing from a socialist point of view for Orage, he was also moving to an Anglo-Catholic religious stance. In 1911 he started editorial work for Belloc, with whom he wrote in The Party System, a criticism of party politics. In 1912 he formally became a Roman Catholic.

That same year he bought Belloc’s failing weekly Eye-Witness; Charles Granville who published it had been made bankrupt. He renamed it The New Witness, editing it for four years before enlisting in the army, and turning it into a scandal sheet. His persistent attacks on prominent political figures involved in the Marconi scandal (such as Lloyd George), and his public defence of his position in terms of a ‘Jewish problem’, have left him with a reputation as an anti-Semite. He was successfully brought to court by Godfrey Isaacs, one of those attacked, although the damages awarded were nominal. A government investigation revealed that high government officials had engaged in insider trading in the stock of Marconi’s American subsidiary, but the quantity of stocks they were known to have purchased was relatively small.

In 1916 he married journalist Ada Elizabeth Jones, later known as a writer, after a long courtship. He joined the Highland Light Infantry as a private soldier. His brother Gilbert took over the paper, with Ada as Secretary and Business Manager. Eventually in 1925 Gilbert, with great reluctance, allowed it to be renamed G. K.’s Weekly because his name was very well-known and likely to attract interest.

He was three times wounded fighting in France, and died there in a hospital of nephritis on 6 December 1918. His wife Ada had rushed to his bedside and she arrived just before he died. She was his only relative at his funeral. Although sick, he had refused to leave his post until the Armistice. On 13 December, G. K. Chesterton would report his death in the New Witness, noting that “He lived long enough to march to the victory which was for him a supreme vision of liberty and the light.”