The editor and publisher of these volumes, which include not less than several hundred biographies spread across the six books, presents them confidently as a verified and authoritative history of the county – the result of conscientious labor in original research , and of information imparted by pioneers and their descendants , entered upon originally as a pastime and without thought of publication of the collated material. It essays to present county and city historical data that had lasting bearing on the times, but which with many of the picturesque incidents were ignored or overlooked in the publications that have gone before; and lastly it is an endeavor also to fill in the hiatus of the years from 1882 through the first World War, to bring to date the tale of the development and growth of a county which, from a small beginning with a rough and uncouth mining population and hardy pioneers, has become one of the richest, politically best governed and industrially typical of a great state. Incredible as their development and growth have been, through successive industrial epochs, the mind cannot grasp the future of State and County, now that the twin Sacramento and San Joaquin Valleys have reached the zenith of development and production. Today Fresno County is a leading contributor to California’s greater riches, enhanced production, and to the unmeasured happiness and prosperity of its citizens. Fresno is one of the state’s centers. A remarkable past will be eclipsed by a more wonderful future – it is manifest destiny. This is volume four out of six. 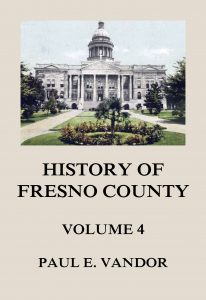 A very important factor in the promotion of the Fresno Flume and Irrigation Company, was the late Charles B. Shaver, who located in Fresno in 1892. Being a man of extensive experience in the lumber business he foresaw the possibilities of the Fresno Flume and Irrigation Company, an enterprise which had just been organized, and immediately bought an interest in the company and at once assumed charge of the construction, completing the surveys and building the flumes from Stevenson Creek, where the company built a dam sixty feet high, to Clovis, Fresno County, the flume being forty and one quarter miles in length, and requiring 9,000,000 feet of lumber to construct and an expense of $200,000. At the same time the construction of mills in the mountains was begun and carried to completion, two years being occupied in preparation for this extensive work. The planing mills, box factory and dry kilns of the company are located in Clovis, to which place the lumber is brought down by the flume. The output of this great enterprise is shipped to all parts of the world. To the energy, enterprise and experience of Charles B. Shaver, is due the culmination of this important undertaking, which has proved of such great importance in the development of this section of Fresno County.

Charles B. Shaver was a native of Steuben County, N. Y., where he was born in 1855, a son of John L. Shaver who was a native of Delaware County, of the same state. John L. Shaver was a miller in New York state until 1864, when he removed to St. Louis, Gratiot County, Mich., where he engaged in farming and continued to make his home until his death, which occurred at the age of seventy-four years. His wife, who in maidenhood, was Mary Rose, has also passed away. Charles B. Shaver was next to the youngest child in a family of four and received his early education in the public schools of Michigan, to which state he moved with his parents when a lad of nine years. At the age of nineteen he engaged in lumbering and was employed by Whitney and Stinchfield of Detroit, Mich., later becoming a foreman in the woods and in which position he remained until 1882, when he resigned and accepted a position with A. B. Long and Son of Grand Rapids, Mich. While in their employ he assisted in the building of the logging railway and became interested in their mills and lumber plant until 1889, when he resigned and became associated with the White Friant Lumber Company, with whom he continued two years and during which time he constructed fourteen miles of logging railway and put in over one hundred million feet of logs. In 1891 he went to Missouri where he built a mill for Boyden and Wyman Lumber Company, at Neelysville, Mo. In 1892, he migrated to California and located at Fresno, where he was instrumental in the building and the development of the Fresno Flume and Irrigation Company, becoming the president of the organization in 1894. He was also a member of the Pine Box and Lumber Company, of San Francisco, and the California Sugar and White Pine Agency, in both of which companies he served as a director.

In Grand Rapids, Mich., on December 6, 1883, Charles B. Shaver was united in marriage with Lena A. Roberts, a native of Pennsylvania. This union was blessed with three children: Grace, who is the wife of Captain H. J. Craycroft, U. S. A. medical detachment; Mrs. Ethel Hoover; and Doris who is the wife of Harold McDonald, of Fresno.

After a very active and successful career, Charles B. Shaver passed away on Christmas day, 1907. Fraternally, he was a Mason, having joined the organization in Edmore, Mich., later becoming a member of Fresno Lodge, No. 247, F. & A. M.; he also belonged to Trigo Chapter No. 69, Fresno Lodge No. 29, K. T., Lodge of Perfection at Fresno and Islam Temple A. A. O. N. M. S. of San Francisco. He was a member of Fresno Lodge No. 439 B. P. O. Elks, the Chamber of Commerce and the Sequoia Club.

Prominent among the citizens of widely-felt influence in both the commercial and financial circles of Fresno, and one whose contributions to the development of the resources of the San Joaquin Valley have proven of inestimable value and are generally recognized, is A. G. Wishon, the worthy representative of a family that traces its ancestry with justifiable pride through the history of the State of North Carolina, back to the romantic days of la belle France. He was born in Phelps County, Mo., on November 6, 1858, the son of Marion Wishon, a native of East St. Louis, Ill., who was a farmer and merchant at St. James, in, Phelps County, and a man of unusual ability. He interested himself for years in fostering the best movements for the community, and consented to serve as the first Sheriff — and an intrepid one, too — of that county. He married Miss Mary Coppedge of Missouri, a daughter of Lindsay L. Coppedge, a Virginian and an honored member of an old and distinguished family of that State. He came to be a pioneer settler of Pulaski County, Mo., and for sixty years resided at Coppedge Mills, a place named from the mill he established there. Seven children were born to Mr. and Mrs. Marion Wishon, among whom the subject of this review is the eldest; and five of whom, and also the mother, are now residing in California.

After completing his education at the Missouri School of Mines, at Rolla, Mo., a branch of the well-endowed University of Missouri, A. G. Wishon at the age of eighteen became dependent upon his own resources and was for a while employed in the office of the wholesale grocery firm of Moody, Michel and Company of St. Louis. Later, he traveled through the South for the Adler Goldman Company, cotton brokers and commission merchants of the same city, and after that he engaged in mercantile business for himself and successfully conducted stores at Sullivan and Stanton, Franklin County, and at St. James, Mo. When he disposed of his stores, he became chief of office for Captain R. M. Peck, superintendent of bridges and buildings of the Missouri Pacific Railroad at Pacific, a town in Franklin County; and on resigning from that trust in 1888, he migrated to California with so many thousands of others who were attracted here through the great land boom of the late eighties.

Arriving in the Golden State, he associated himself with the old San Joaquin Lumber Company at Tulare, at that time under the general management of T. G. Yancey, and local management of E. Lathrop, and subsequently he filled the position of cashier and bookkeeper for the Tulare County Bank. Still later, he opened an office in Tulare for the promotion of various enterprises and the disposition of lands, and he became a notable factor in the promotion of pump irrigation in the San Joaquin Valley, a scientific enterprise that soon rendered highly productive vast areas of land which hitherto could not be profitably cultivated.

Mr. Wishon’s first extensive project was the building of the Exeter Ditch, for which the water was brought from the Kaweah River above Lemon Cove, and along the base of the hills almost to Lindsay, Tulare County, a distance of about twenty miles. At the time when this difficult and expensive task was undertaken, there was not an orange or lemon grove in the region designed to be supplied by the canal, but through his successful completion of the work he transformed the country into one of the best citrus-fruit producing sections of the State. He financed the enterprise and after its completion sold his lands at a handsome, deserved profit; and some of the acreage then disposed of includes today some of the finest California groves.

Another important enterprise which was fostered and developed by A. G. Wishon, and which has brought to so many incalculable returns, was the organization of the Mt. Whitney Power Company, which was the pioneer in electrical pumping in California. Having secured the rights to the headwaters of the Kaweah, he then associated with him as partner William H. Hammond, brother of John Hays Hammond, the famous mining expert, and installed a power plant, and not only did he bring the project to a reality, but he himself managed the enterprise until its success was assured. This plant distributes power and light to Tulare, Visalia, Exeter, Porterville and Lindsay.

In May, 1903, Mr. Wishon became the General Manager of the San Joaquin Power Company of Fresno, and soon after Vice-President, Director and Manager of the Fresno City Railroad, and Vice-President and Manager of the Fresno Water Company. In 1904, foreseeing the increasing appeal of Nature’s wonderland and the rapid advances in population, he was active in the organization of the Fresno Traction Company, with a capitalization of $5,000,000, to absorb the Fresno City Railroad and to construct a line to the Yosemite Valley, a distance of eighty miles through a most picturesque section of the State, and he has gradually become associated with many other California enterprises, a number of which he helped to found.

On October 5, 1881, Mr. Wishon was united in marriage with Miss Henrietta Emory, a native of Steelville, Mo., and the daughter of Azro Emory of St. James, Mo., members of the Emory family that has already given to the advance intellectual guard of America a leading bishop, an educator, a soldier of prominence and a naval official who distinguished himself while commanding the Bear of the Greely Relief Expedition. The ceremony was solemnized at St. James, Mo., and of that happy union two children were born, Emory and Jenny.

Fraternally, Mr. Wishon is a Mason and a charter member of Las Palmas Lodge, F. & A. M., at Fresno, and also of other branches of the order. He belongs as well to the Fresno Chamber of Commerce, where he is never found wanting when expected to put his shoulder to the wheel, and to the Sequoia, Commercial, University and Sunnyside clubs of Fresno, the California Club of Los Angeles, and various other representative organizations throughout the state.