History of Texas: Fort Worth and the Texas Northwest Vol. 1

History of Texas: Fort Worth and the Texas Northwest Vol. 1 – Buckley P. Paddock

Capt. B. B. Paddock was one of the most prolific authors on Texas history. His writings are probably the most complete and best balanced ones. This book covers the history of the Texas Northwest and especially the history of the Fort Worth Region. This is volume one out of two. 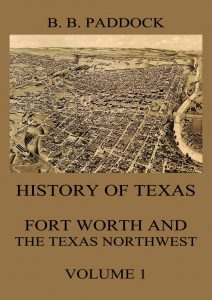 History of Texas: Fort Worth and the Texas Northwest Vol. 1

History of Texas: Fort Worth and the Texas Northwest Vol. 1.

Fort Worth Basics (from Wikipedia):

Fort Worth is the 16th-largest city in the United States and the fifth-largest city in the state of Texas. The city is in North Central Texas and covers nearly 350 square miles (910 km2) in the counties of Denton, Parker, Wise, Johnson, and Tarrant, of which it is the county seat. According to the 2016 census estimates, Fort Worth’s population is 854,113. The city is the second-largest in the Dallas–Fort Worth–Arlington metropolitan area (the “DFW Metroplex”).

The city was established in 1849 as an Army outpost on a bluff overlooking the Trinity River. Today, Fort Worth still embraces its Western heritage and traditional architecture and design. USS Fort Worth (LCS-3) is the first ship of the United States Navy named after the city.

Fort Worth boasts one of the most dynamic downtowns in America and is home to the Van Cliburn International Piano Competition and several world-class museums designed by internationally known contemporary architects. The Kimbell Art Museum, considered to have one of the best collections in Texas, is housed in what is widely regarded as one of the state’s foremost works of modern architecture, designed by Louis Kahn with an addition by Renzo Piano. Also of note is the Modern Art Museum of Fort Worth, designed by Tadao Ando. The Amon Carter Museum of American Art, designed by Philip Johnson, houses one of the world’s most extensive collections of American art. The Sid Richardson Museum, redesigned by David M. Schwarz, has one of the most focused collections of Western Art in the U.S., emphasizing Frederic Remington and Charles Russell.