This book purports to be a record of the adventures of a spirited maiden, who served her country in the hospital with the same cheerful spirit New England girls are noted for manifesting at home. The sketches are almost a literal reproduction of Louisa May Alcott’s letters to her family and were hastily written, and with little regard to literary execution, but they are fresh and original, and, still more, they are true, and they appeared at just the time the public wanted them. Every heart was longing to hear not only from field and camp, but from the hospitals, where sons and brothers were tenderly cared for. The generous, hopeful spirit with which Miss Alcott entered into the work was recognized as that which animated the brave corps of women who answered so promptly to their country’s call, and every loyal and loving heart vibrated in unison with the strings she touched so skillfully. 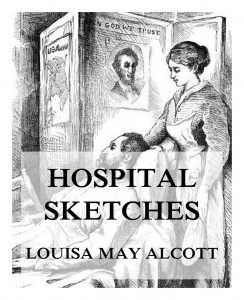 “I want something to do.”

This remark being addressed to the world in general, no one in particular felt it their duty to reply; so I repeated it to the smaller world about me, received the following suggestions, and settled the matter by answering my own inquiry, as people are apt to do when very much in earnest.

“Write a book,” quoth the author of my being.

“No thank you, ma’am, ten years of that is enough.”

“Take a husband like my Darby, and fulfill your mission,” said sister Joan, home on a visit.

So far, very good. Here was the will—now for the way. At first sight not a foot of it appeared, but that didn’t matter, for the Periwinkles are a hopeful race; their crest is an anchor, with three cock-a-doodles crowing atop. They all wear rose-colored spectacles, and are lineal descendants of the inventor of aerial architecture. An hour’s conversation on the subject set the whole family in a blaze of enthusiasm. A model hospital was erected, and each member had accepted an honorable post therein. The paternal P. was chaplain, the maternal P. was matron, and all the youthful P.s filled the pod of futurity with achievements whose brilliancy eclipsed the glories of the present and the past. Arriving at this satisfactory conclusion, the meeting adjourned, and the fact that Miss Tribulation was available as army nurse went abroad on the wings of the wind.

In a few days a townswoman heard of my desire, approved of it, and brought about an interview with one of the sisterhood which I wished to join, who was at home on a furlough, and able and willing to satisfy all inquiries. A morning chat with Miss General S.—we hear no end of Mrs. Generals, why not a Miss?—produced three results: I felt that I could do the work, was offered a place, and accepted it, promising not to desert, but stand ready to march on Washington at an hour’s notice.

A few days were necessary for the letter containing my request and recommendation to reach headquarters, and another, containing my commission, to return; therefore no time was to be lost; and heartily thanking my pair of friends, I tore home through the December slush as if the rebels were after me, and like many another recruit, burst in upon my family with the announcement—

An impressive silence followed. Tom, the irrepressible, broke it with a slap on the shoulder and the graceful compliment—

“Thank you; then I’ll take something:” which I did, in the shape of dinner, reeling off my news at the rate of three dozen words to a mouthful; and as every one else talked equally fast, and all together, the scene was most inspiring.

As boys going to sea immediately become nautical in speech, walk as if they already had their “sea legs” on, and shiver their timbers on all possible occasions, so I turned military at once, called my dinner my rations, saluted all new comers, and ordered a dress parade that very afternoon. Having reviewed every rag I possessed, I detailed some for picket duty while airing over the fence; some to the sanitary influences of the wash-tub; others to mount guard in the trunk; while the weak and wounded went to the Work-basket Hospital, to be made ready for active service again. To this squad I devoted myself for a week; but all was done, and I had time to get powerfully impatient before the letter came. It did arrive however, and brought a disappointment along with its good will and friendliness, for it told me that the place in the Armory Hospital that I supposed I was to take, was already filled, and a much less desirable one at Hurly-burly House was offered instead.

“That’s just your luck, Trib. I’ll tote your trunk up garret for you again; for of course you won’t go,” Tom remarked, with the disdainful pity which small boys affect when they get into their teens. I was wavering in my secret soul, but that settled the matter, and I crushed him on the spot with martial brevity—

I have a confused recollection of spending the afternoon in pervading the house like an executive whirlwind, with my family swarming after me, all working, talking, prophesying and lamenting, while I packed my “go-abroady” possessions, tumbled the rest into two big boxes, danced on the lids till they shut, and gave them in charge, with the direction,—

“If I never come back, make a bonfire of them.”

Then I choked down a cup of tea, generously salted instead of sugared, by some agitated relative, shouldered my knapsack—it was only a traveling bag, but do let me preserve the unities—hugged my family three times all round without a vestige of unmanly emotion, till a certain dear old lady broke down upon my neck, with a despairing sort of wail—

Much of the Roman matron’s courage had gone into the Yankee matron’s composition, and, in spite of her tears, she would have sent ten sons to the war, had she possessed them, as freely as she sent one daughter, smiling and flapping on the door-step till I vanished, though the eyes that followed me were very dim, and the handkerchief she waved was very wet.

My transit from The Gables to the village depot was a funny mixture of good wishes and good byes, mud-puddles and shopping. A December twilight is not the most cheering time to enter upon a somewhat perilous enterprise, and, but for the presence of Vashti and neighbor Thorn, I fear that I might have added a drop of the briny to the native moisture of—

“The town I left behind me;”

though I’d no thought of giving out: oh, bless you, no! When the engine screeched “Here we are,” I clutched my escort in a fervent embrace, and skipped into the car with as blithe a farewell as if going on a bridal tour—though I believe brides don’t usually wear cavernous black bonnets and fuzzy brown coats, with a hair-brush, a pair of rubbers, two books, and a bag of ginger-bread distorting the pockets of the same. If I thought that any one would believe it, I’d boldly state that I slept from C. to B., which would simplify matters immensely; but as I know they wouldn’t, I’ll confess that the head under the funereal coal-hod fermented with all manner of high thoughts and heroic purposes “to do or die,”—perhaps both; and the heart under the fuzzy brown coat felt very tender with the memory of the dear old lady, probably sobbing over her army socks and the loss of her topsy-turvy Trib. At this juncture I took the veil, and what I did behind it is nobody’s business; but I maintain that the soldier who cries when his mother says “Good bye,” is the boy to fight best, and die bravest, when the time comes, or go back to her better than he went.

Till nine o’clock I trotted about the city streets, doing those last errands which no woman would even go to heaven without attempting, if she could. Then I went to my usual refuge, and, fully intending to keep awake, as a sort of vigil appropriate to the occasion, fell fast asleep and dreamed propitious dreams till my rosy-faced cousin waked me with a kiss.

A bright day smiled upon my enterprise, and at ten I reported myself to my General, received last instructions and no end of the sympathetic encouragement which women give, in look, touch, and tone more effectually than in words. The next step was to get a free pass to Washington, for I’d no desire to waste my substance on railroad companies when “the boys” needed even a spinster’s mite. A friend of mine had procured such a pass, and I was bent on doing likewise, though I had to face the president of the railroad to accomplish it. I’m a bashful individual, though I can’t get any one to believe it; so it cost me a great effort to poke about the Worcester depot till the right door appeared, then walk into a room containing several gentlemen, and blunder out my request in a high state of stammer and blush. Nothing could have been more courteous than this dreaded President, but it was evident that I had made as absurd a demand as if I had asked for the nose off his respectable face. He referred me to the Governor at the State House, and I backed out, leaving him no doubt to regret that such mild maniacs were left at large. Here was a Scylla and Charybdis business: as if a President wasn’t trying enough, without the Governor of Massachusetts and the hub of the hub piled on top of that. “I never can do it,” thought I. “Tom will hoot at you if you don’t,” whispered the inconvenient little voice that is always goading people to the performance of disagreeable duties, and always appeals to the most effective agent to produce the proper result. The idea of allowing any boy that ever wore a felt basin and a shoddy jacket with a microscopic tail, to crow over me, was preposterous, so giving myself a mental slap for such faint-heartedness, I streamed away across the Common, wondering if I ought to say “your Honor,” or simply “Sir,” and decided upon the latter, fortifying myself with recollections of an evening in a charming green library, where I beheld the Governor placidly consuming oysters, and laughing as if Massachusetts was a myth, and he had no heavier burden on his shoulders than his host’s handsome hands.

Like an energetic fly in a very large cobweb, I struggled through the State House, getting into all the wrong rooms and none of the right, till I turned desperate, and went into one, resolving not to come out till I’d made somebody hear and answer me. I suspect that of all the wrong places I had blundered into, this was the most so. But I didn’t care; and, though the apartment was full of soldiers, surgeons, starers, and spittoons, I cornered a perfectly incapable person, and proceeded to pump for information with the following result:

“Was the Governor anywhere about?”