The “Italian Journeys” of Mr. Howells date from the year 1864, when the author was still our Consul at Venice, and had just taken the first step in his long, honorable career as a man of letters by the publication of Venetian Life. His excursions lead him not only from Venice as far as Belmont, but also through many highways and byways of the Italian peninsula, one foot in sea and one on shore, by Parma and Mantua, Bologna and Genoa, Padua, Ferrara and Arqua, to the more familiar environment of Rome and Naples. Since all travelling, as the ” sage observes, gives a return in proportion to the knowledge that a man brings to it, the value of a book of travel must depend upon the traveler; and no one needs to be reminded that this adventurer, in setting forth, was especially well equipped for the enterprise by his years in Venice, which gave him exceptional opportunity for study of the Italian language and literature. Day by day, he recorded the haps and hazards of his wandering, with the keenness of observation and delicacy of expression which already had gained for him the regard of thoughtful readers. His individuality is never lost; it is always his point of view that we acquire — not the pale reflex of another mind which has glanced that way before him. He keeps throughout, unblinded by prejudice and unobscured by affectation, that clear, receptive vision which makes the intelligent American traveler one of the best in the world. But over and above this he brings to bear upon all he sees a peculiar sympathy, which is the result of long association with things Italian. He is always an American, but an acclimated American. The prospect at Arqua reminds him of the Ohio hills; that at Mantua of the Middle Mississippi; yet at the Stella d’Oro, in Ferrara, he can join a group of Italian soldiers, and, winning their confidence, become one with them, for the time being, in their pleasant scheme for unifying Italy by persistent elimination of local dialects from their after-dinner talk, in favor of the common language.. 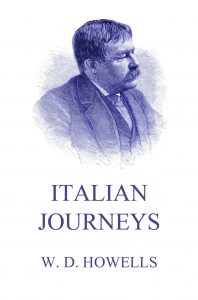 It was one of the fatalities of travel, rather than any real interest in the poet, which led me to visit the prison of Tasso on the night of our arrival, which was mild and moonlit. The portier at the Stella d’Oro suggested the sentimental homage to sorrows which it is sometimes difficult to respect, and I went and paid this homage in the coal-cellar in which was never imprisoned the poet whose works I had not read.

The famous hospital of St. Anna, where Tasso was confined for seven years, is still an asylum for the infirm and sick, but it is no longer used as a mad-house. It stands on one of the lone, silent Ferrarese streets, not far from the Ducal Castle, and it is said that from the window of his cell the unhappy poet could behold Leonora in her tower. It may be so; certainly those who can believe in the genuineness of the cell will have no trouble in believing that the vision of Tasso could pierce through several brick walls and a Doric portico, and at last comprehend the lady at her casement in the castle. We entered a modern gateway, and passed into a hall of the elder edifice, where a slim young soldier sat reading a romance of Dumas. This was the keeper of Tasso’s prison; and knowing me, by the instinct which teaches an Italian custodian to distinguish his prey, for a seeker after the True and Beautiful, he relinquished his romance, lighted a waxen taper, unbolted a heavy door with a dramatic clang, and preceded me to the cell of Tasso. We descended a little stairway, and found ourselves in a sufficiently spacious court, which was still ampler in the poet’s time, and was then a garden planted with trees and flowers. On a low doorway to the right was inscribed the legend “PRIGIONE DI TASSO,” and passing through this doorway into a kind of reception-cell, we entered the poet’s dungeon. It is an oblong room, with a low wagon-roof ceiling, under which it is barely possible to stand upright. A single narrow window admits the light, and the stone casing of this window has a hollow in a certain place, which might well have been worn there by the friction of the hand that for seven years passed the prisoner his food through the small opening. The young custodian pointed to this memento of suffering, without effusion, and he drew my attention to other remarkable things in the cell, without troubling himself to palliate their improbability in the least. They were his stock in trade; you paid your money, and took your choice of believing in them or not. On the other hand, my portier, an ex-valet de place, pumped a softly murmuring stream of enthusiasm; and expressed the freshest delight in the inspection of each object of interest.

One still faintly discerns among the vast number of names with which the walls of the ante-cell are bewritten, that of Lamartine. The name of Byron, which was once deeply graven in the stucco, had been scooped away by the Grand Duke of Tuscany (so the custodian said), and there is only part of a capital B now visible. But the cell itself is still fragrant of associations with the noble bard, who, according to the story related to Valery, caused himself to be locked up in it, and there, with his head fallen upon his breast, and frequently smiting his brow, spent two hours in pacing the floor with great strides. It is a touching picture; but its pathos becomes somewhat embarrassing when you enter the cell, and see the impossibility of taking more than three generous paces without turning. When Byron issued forth, after this exercise, he said (still according to Valery) to the custodian: “I thank thee, good man! The thoughts of Tasso are now all in my mind and heart.” “A short time after his departure from Ferrara,” adds the Frenchman, maliciously, “he composed his ‘Lament of Tasso,’ a mediocre result from such inspiration.” No doubt all this is colored, for the same author adds another tint to heighten the absurdity of the spectacle: he declares that Byron spent part of his time in the cell in writing upon the ceiling Lamartine’s verses on Tasso, which he misspelled. The present visitor has no means of judging of the truth concerning this, for the lines of the poet have been so smoked by the candles of successive pilgrims in their efforts to get light on them, that they are now utterly illegible. But if it is uncertain what were Byron’s emotions on visiting the prison of Tasso, there is no doubt about Lady Morgan’s: she “experienced a suffocating emotion; her heart failed her on entering that cell; and she satisfied a melancholy curiosity at the cost of a most painful sensation.”

I find this amusing fact stated in a translation of her ladyship’s own language, in a clever guide-book called Il Servitore di Piazza, which I bought at Ferrara, and from which, I confess, I have learnt all I know to confirm me in my doubt of Tasso’s prison. The Count Avventi, who writes this book, prefaces it by saying that he is a valet de place who knows how to read and write, and he employs these unusual gifts with singular candor and clearness. No one, he says, before the nineteenth century, ever dreamed of calling the cellar in question Tasso’s prison, and it was never before that time made the shrine of sentimental pilgrimage, though it has since been visited by every traveller who has passed through Ferrara. It was used during the poet’s time to hold charcoal and lime; and not long ago died an old servant of the hospital, who remembered its use for that purpose. It is damp, close, and dark, and Count Avventi thinks it hardly possible that a delicate courtier could have lived seven years in a place unwholesome enough to kill a stout laborer in two months; while it seems to him not probable that Tasso should have received there the visits of princes and other distinguished persons whom Duke Alfonso allowed to see him, or that a prisoner who was often permitted to ride about the city in a carriage should have been thrust back into such a cavern on his return to the hospital. “After this,” says our valet de place who knows how to read and write, “visit the prison of Tasso, certain that in the hospital of St. Anna that great man was confined for many years;” and, with this chilly warning, leaves his reader to his emotions.

I am afraid that if as frank caution were uttered in regard to other memorable places, the objects of interest in Italy would dwindle sadly in number, and the valets de place, whether they know how to read and write or not, would be starved to death. Even the learning of Italy is poetic; and an Italian would rather enjoy a fiction than know a fact—in which preference I am not ready to pronounce him unwise. But this characteristic of his embroiders the stranger’s progress throughout the whole land with fanciful improbabilities; so that if one use his eyes half as much as his wonder, he must see how much better it would have been to visit, in fancy, scenes that have an interest so largely imaginary. The utmost he can make out of the most famous place is, that it is possibly what it is said to be, and is more probably as near that as any thing local enterprise could furnish. He visits the very cell in which Tasso was confined, and has the satisfaction of knowing that it was the charcoal-cellar of the hospital in which the poet dwelt. And the genius loci—where is that? Away in the American woods, very likely, whispering some dreamy, credulous youth,—telling him charming fables of its locus, and proposing to itself to abandon him as soon as he sets foot upon its native ground. You see, though I cared little about Tasso, and nothing about his prison, I was heavily disappointed in not being able to believe in it, and felt somehow that I had been awakened from a cherished dream.