Calvin produced commentaries on most of the books of the Bible. His commentaries cover the larger part of the Old Testament, and all of the new excepting Second and Third John and the Apocalypse. His commentaries and lectures stand in the front rank of Biblical interpretation. The Commentaries On Jeremiah, like those on The Minor Prophets, were delivered as Lectures In The Theological School At Geneva, taken down by some of the Pupils, and afterwards read to Calvin, and corrected. We find in them the production of the same vigorous and expansive mind: The Divine Oracles are faithfully explained, the meaning is clearly stated, and such brief deductions are made as the subjects legitimately warrant. Though the Lectures were extemporaneously delivered, there is yet so much order preserved, and such brevity, clearness, and suitableness of diction are found in them, that in these respects they nearly equal the most finished compositions of Calvin as proof that he possessed a mind of no common order. The Ministry Of Jeremiah extended over a large space of time from the thirteenth year of Josiah’s reign till after the final overthrow of the nation; but for how long after that period, it is not known. fA1 Between the thirteenth year of Josiah and the destruction of the city and Temple, there were about forty years. This was a remarkable period, and Jeremiah nearly alone labored among the people. Their sins had been for the most part the same for a long time – for nearly two centuries, as it appears from the testimonies of his predecessors, Amos, Hosea, Isaiah, Joel, Micah, Nahum, and Zephaniah; for these seven had in this order preceded him. Zephaniah And Habakkuk were probably for a time his contemporaries, the first at the commencement, and the other near the end of his ministry. 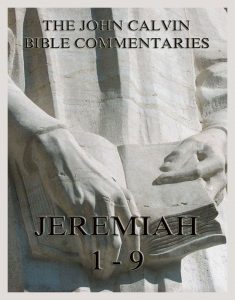