Calvin produced commentaries on most of the books of the Bible. His commentaries cover the larger part of the Old Testament, and all of the new excepting Second and Third John and the Apocalypse. His commentaries and lectures stand in the front rank of Biblical interpretation. Commentaries On The Gospel Of John are numerous, and some of them are written with great learning and ability. Rarely has a separate and extended interpretation been given to any of the other three Gospels, which are, indeed, so closely interwoven with each other, that it is scarcely possible to expound one of them in a satisfactory manner, without bringing the whole into one view, comparing parallel passages, accounting for apparent contradictions, and supplying the omissions of each narrative, to such an extent as to produce what shall be in substance, though not always in form, a HARMONY OF THE THREE EVANGELISTS. The present Work brings under review some of the most intricate questions in theology; and in handling them he is not more careful to learn all that has been revealed than to avoid unauthorized speculation. They who know the difficulty of the path will the more highly appreciate so skillful a guide, who advances with a firm step, points out the bypaths which have misled the unwary, conducts us to scenes which we had not previously explored, and aids us in listening to a Divine voice which says, This is the way, walk, ye in it. This edition contains the commentaries on John 1 – 11. 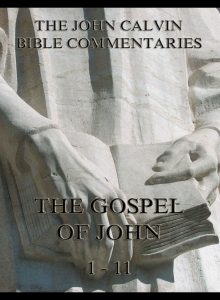 John Calvin’s Bible Commentaries On The Gospel Of John 1-11.