This volume contains a complete English translation of the famous Ethiopian work, The “Kebra Nagast”, i.e. the “Glory of the Kings [of Ethiopia]”. This work has been held in peculiar honour in Abyssinia for several centuries, and throughout that country it has been, and still is, venerated by the people as containing the final proof of their descent from the Hebrew Patriarchs, and of the kinship of their kings of the Solomonic line with Christ, the Son of God. The Kebra Nagast is a great storehouse of legends and traditions, some historical and some of a purely folk-lore character, derived from the Old Testament and the later Rabbinic writings, and from Egyptian (both pagan and Christian), Arabian, and Ethiopian sources. 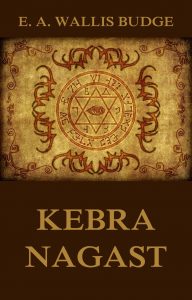 Summary of the Contents (from Wikipedia):

The Kebra Nagast is divided into 117 chapters, and is clearly a composite work; Ullendorff describes its narrative as “a gigantic conflation of legendary cycles.” The document is presented in the form of a debate by the 318 “orthodox fathers” of the First Council of Nicaea. These fathers pose the question, “Of what doth the Glory of Kings consist?” One Gregory answers with a speech (chapters 3-17) which ends with the statement that a copy of the Glory of God was made by Moses and kept in the Ark of the Covenant. After this, the archbishop Domitius reads from a book he had found in the church of “Sophia” (possibly Hagia Sophia)[citation needed], which introduces what Hubbard calls “the centerpiece” of this work, the story of Makeda (better known as the Queen of Sheba), King Solomon, Menelik I, and how the Ark came to Ethiopia (chapters 19-94).

Although the author of the final redaction identified this Gregory with Gregory Thaumaturgus, who lived in the 3rd century before this Council, the time and the allusion to Gregory’s imprisonment for 15 years by the king of Armenia make Gregory the Illuminator a better fit.

Queen Makeda learns from Tamrin, a merchant based in her kingdom, about the wisdom of King Solomon, and travels to Jerusalem to visit him. She is enthralled by his display of learning and knowledge, and declares “From this moment I will not worship the sun, but will worship the Creator of the sun, the God of Israel” (chapter 28). The night before she begins her journey home, Solomon tricks her into sleeping with him, and gives her a ring so that their child may identify himself to Solomon. Following her departure, Solomon has a dream in which the sun leaves Israel (chapter 30).

On the journey home, she gives birth to Menelik (chapter 32).

At the age of 22, Menelik travels to Jerusalem by way of Gaza, seeking Solomon’s blessing, and identifies himself to his father with the ring. Overjoyed by this reunion, Solomon tries to convince Menelik to stay and succeed him as king, but Menelik insists on returning to his mother in Ethiopia. King Solomon then settles for sending home with him a company formed from the first-born sons of the elders of his kingdom. This company of young men, upset over leaving Jerusalem, then smuggle the Ark from the Temple and out of Solomon’s kingdom (chapters 45-48) without Menelik’s knowledge. He had asked of Solomon only for a single tassel from the covering over the Ark, and Solomon had given him the entire cloth.

During the journey home, Menelik learns the Ark is with him, and Solomon discovers that it is gone from his kingdom. The king attempts to pursue Menelik, but through the Ark’s mysterious power, his son with his entire entourage is miraculously flown home to Ethiopia before Solomon can leave his kingdom. King Solomon then turns to solace from his wife, the daughter of the Pharaoh of Egypt, and she seduces him into worshiping the idols of her land (chapter 64).

After a question from the 318 bishops of the Council, Domitius continues with a paraphrase of Biblical history (chapters 66-83) then describes Menelik’s arrival at Axum, where he is feasted and Makeda abdicates the throne in his favor. Menelik then engages in a series of military campaigns with the Ark, and “no man conquered him, on the contrary, whosoever attacked him was conquered” (chapter 94).

After praising the book Domitius has found, which has established not only Ethiopia’s possession of the true Ark of the Covenant, but that the Solomonic dynasty is descended from the first-born son of Solomon (chapter 95). Gregory then delivers an extended speech with prophetic elements (chapters 95-112), forming what Hubbard calls a “Patristic collection of Prophecies”: “There can be little doubt that chapters 102-115 are written as polemic against, if not an evangel to, the Jews. These chapters seek to prove by OT [Old Testament] allegories and proof-texts the Messianic purpose of Jesus, the validity of the Ethiopian forms of worship, and the spiritual supremacy of Ethiopia over Israel.” Hubbard further speculates that this selection from the Old Testament might be as old as Frumentius, who had converted the Kingdom of Axum to Christianity.

The Kebra Nagast concludes with a final prophecy that the power of Rome will be eclipsed by the power of Ethiopia, and describes how king Kaleb of Axum will subdue the Jews living in Najran, and make his younger son Gabra Masqal his heir (chapter 117).