Lectures on the French Revolution

The two volumes of his lectures on modern history and on the French Revolution give us in their full ripeness the sum of Acton’s historical judgments. History was not to Acton a mere academic pursuit. With that view of history which considers it, beneath the dry light of science, as a series of phenomena capable of detachment from the present, susceptible to separate analysis, he had no sympathy. Still less did he consider history a mere form of literary exposition. The one justification for the study of history was to Acton its value as a guide in the affairs of the every-day world. The present is what it is because of what the past has been. Human development has been a continuous chain of cause and effect. Any course of action in the present must be based upon a knowledge of the way in which things we now do are hedged in, limited by what men have done before us. History thus becomes a great mentor, a schoolmaster of action. 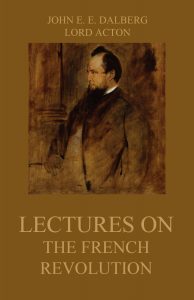 Lectures on the French Revolution

Lectures on the French Revolution.