Little Dorrit was published 1856-57, when the author’s popularity was at its height. The plot is a slight one on which to hang more than fifty characters. The author began with the intention of emphasizing the fact that individuals brought together by chance, if only for an instant, continue henceforth to influence and to act and react upon one another. But this original motive is soon altogether forgotten in the multiplication of characters and the relation of their fortunes. The central idea is to portray the experiences of the Dorrit family, immured for many years on account of debt in the old Marshalsea Prison, and then unexpectedly restored to wealth and freedom. Having been pitiable in poverty, they become arrogant and contemptible in affluence. Amy, “Little Dorrit,” alone remains pure, lovable, and self-denying. In her, Dickens embodies the best human qualities in a most beautiful and persuasive form. She enlists the love of Arthur Clennam, who meantime has had his own trials. Returning from India, after long absence, he finds his mother a religious fanatic, domineered over by the hypocritical old Flintwinch, and both preyed upon by the Mephistophelian Blandois, perhaps the most dastardly villain in the whole Dickens gallery. The complications, however, end happily for Arthur and Amy. The main attack of the book is aimed against official “red tape” as exemplified in the Barnacle family and the “Circumlocution Office.” … 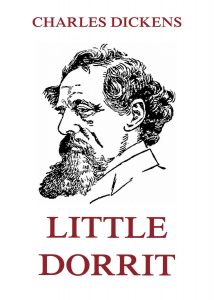 The novel begins in Marseilles “thirty years ago” (i.e., c. 1826), with the notorious murderer Rigaud telling his cell mate how he killed his wife. Arthur Clennam is returning to London to see his mother after the death of his father, with whom he had lived for twenty years in China. On his deathbed, his father had given him a mysterious watch murmuring “Your mother,” which Arthur naturally assumes is intended for Mrs Clennam, whom he believes to be his mother.

Inside the watch casing is an old silk paper with the initials DNF (Do Not Forget) worked into it in beads. It is a message, but when Arthur shows it to the harsh and implacable Mrs Clennam, a religious fanatic, she refuses to tell him what it means and the two become estranged.

In London, William Dorrit, imprisoned as a debtor, has been a resident of Marshalsea debtors’ prison for so long that his three children – snobbish Fanny, idle Edward (known as Tip) and Amy (known as Little Dorrit) — have all grown up there, and Amy was born there. Their mother is dead. The children are free to pass in and out of the prison as they please. Little Dorrit, devoted to her father, supports them both through her sewing.

Once in London, Arthur is reacquainted with his former fiancée Flora Finching, who is now unattractive and simpering. Mrs Clennam, though arthritic and wheelchair-bound, still runs the family business with the help of her servant Jeremiah Flintwinch and his downtrodden wife Affery. When Arthur learns that Mrs Clennam employs Little Dorrit as a seamstress, showing her unusual kindness, he wonders whether the young girl might be connected with the mystery of the watch. Suspecting his mother is partially responsible for the misfortunes of the Dorrits, Arthur follows the girl to the Marshalsea. He vainly tries to inquire about William Dorrit’s debt in the poorly run Circumlocution Office, assuming the role of benefactor towards Little Dorrit, her father, and her brother. While at the Circumlocution Office he meets the struggling inventor Daniel Doyce, whom he decides to help by going into business with him. The grateful Little Dorrit falls in love with Arthur, but Arthur fails to recognise Little Dorrit’s interest. At last, aided by the indefatigable rent-collector and researcher Pancks, Arthur discovers that William Dorrit is the lost heir to a large fortune, enabling him to pay his way out of prison.

The newly freed Dorrit decides that they should tour Europe as a newly respectable family. They travel over the Alps and take up residence for a time in Venice, and finally in Rome, displaying an air of conceit over their new-found wealth. Little Dorrit is not so impressed by their wealth. Eventually, after a spell of delirium, William Dorrit dies as does his distraught brother Frederick, a kind-hearted musician who has always stood by him. Little Dorrit, left alone, returns to London to stay with newly married Fanny and her husband, the foppish Edmund Sparkler.

The fraudulent dealings (similar to a Ponzi scheme) of Edmund Sparkler’s stepfather, Mr. Merdle, end with Merdle’s suicide and the collapse of his bank business, and with it the savings of both the Dorrits and Arthur Clennam. Clennam is now himself imprisoned in the Marshalsea, where he becomes ill and is nursed back to health by Amy. The French villain Rigaud, now in London, discovers that Mrs Clennam hides the fact that Arthur is not her son by birth, and tries to blackmail her. Arthur’s biological mother was a beautiful young singer with whom his father had gone through a non-legal marital ceremony, before being pressured by his wealthy uncle to marry the present Mrs Clennam. The latter had insisted on bringing up little Arthur and denying his mother the right to see him. Arthur’s real mother died of grief at being separated from Arthur and his father; but Mr Clennam’s wealthy uncle, stung by remorse, had left a bequest to Arthur’s biological mother and to “the youngest daughter of her patron,” a kindly musician who had taught and befriended Arthur’s real mother. That patron was Little Dorrit’s paternal uncle, Frederick. As Frederick Dorrit had no daughter, the inheritance was to go to the youngest daughter of Frederick’s younger brother, William; that is, to Little Dorrit.

Mrs Clennam knows of this inheritance and fails to tell Little Dorrit of it for years. Overcome by remorse, the old woman rises from her chair and totters out of her house to reveal the secret to Little Dorrit and beg her forgiveness, which the kind-hearted girl freely grants. Mrs Clennam then falls in the street, never to recover the use of her speech or limbs, as the house of Clennam literally collapses before her eyes, killing Rigaud. Rather than hurt Arthur, Little Dorrit chooses not to reveal what she has learned even though this means forfeiting her legacy.

When Arthur’s business partner Daniel Doyce returns from Russia a wealthy man, Arthur is released with his fortunes revived, and Arthur and Little Dorrit marry.