Jerome A. Watrous, the author of the first volume, and Josiah Seymour Currey, the compiler of the biographical volumes two through five, present a thrilling narrative and in-depth-biographies of an eventful past of a county, the rapid growing of a fantastic city on the lakeshore, and the lives of hundreds of people that were so important for the history of Milwaukee town and country. The whole five books contain thousands of pages of valuable information and are essential for everyone interested in the history the most populous and densely populated county in Wisconsin. This is volume three out of five, containing a wealth of biographies of important people. 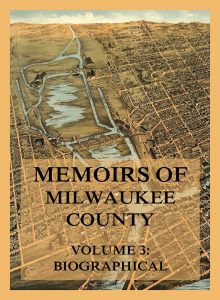 Prominent among the chiropractors of Milwaukee is Dr. Edgar Judd Porter, who has been practicing in this city since 1916. He is one of Milwaukee’s native sons, his birth having occurred here on the 13th of February, 1893, a son of George Y. and Ellen F. (Judd) Porter. George Porter was born on the farm of his father, Willard G. Porter, in Waukesha county and died in 1916. He won prominence in the real estate and insurance circles of Milwaukee. The grandfather of our subject was a native of Vermont and for many years was classed among the representative agriculturists of Waukesha county. Mrs. Ellen F. Porter is living and makes her home with Dr. Porter. She was a daughter of Alfred Judd, who was born near Ithaca, New York, and came to Wisconsin in 1845, locating in the town of Waterford, Racine county.

In the acquirement of an education Edgar Judd Porter attended the Milwaukee grade schools and graduated from the South Division high school in 1911. He then enrolled in Marquette University and became a student in the department of civil engineering, completing that course in the required time. In 1915 he entered the Palmer school of Chiropractic and graduated from that institution in 1916 with the degree of D. C. He immediately took up practice in Milwaukee, where he has remained ever since, having an extensive and steadily increasing patronage. He maintains offices in Suite 404 of the Majestic building and from all over the state people come to him for treatment.

On the 10th of January, 1920, Dr. Porter was united in marriage to Miss Natalie Sommer, a daughter of Solomon Sommer of Milwaukee. Her father was born in Germany and later removed to Russia, in which country Mrs. Porter’s birth occurred. To the union of Dr. and Mrs. Porter one daughter has been born, Constance Elizabeth.

Although Dr. Porter leans toward the republican party, he follows an independent course in politics and has never taken an active part. Fraternally he is a member of the Loyal Order of Moose at Milwaukee and he likewise holds membership in the Kiwanis Club. In line with his profession he is a member of the Milwaukee Chiropractors Association, the Wisconsin Chiropractic Association and the Universal Chiropractors Association. Dr. Porter is a trained civil engineer and an expert on X-ray work, having in his office the latest machine and using this largely in diagnosing cases. Unlike many chiropractors, therefore, he never gropes in the dark when treating a patient and this feature of his practice has been one of the causes of his great success. He has won the utmost confidence and respect of all persons with whom he has come in contact and he stands high in his profession.

Chalmer Boorman Traver, secretary of the Milwaukee Association of Commerce, is a man of broad vision as well as of practical executive ability, and the combination of these qualities well fits him for the responsibilities of his present connection. Mr. Traver was born in Beaver Dam, Wisconsin, March 29, 1889, his parents being Frank A. and Jennie (Boorman) Traver, both of whom are also natives of Wisconsin.

Mr. Traver is an alumnus of the old East Side high school and the University of Wisconsin, which he attended from 1907 to 1910. For some time he was a reporter on the old Evening Wisconsin and also did special work for the Milwaukee Sentinel and the old Milwaukee Free Press, thus gaining broad experience through newspaper connections. Later he was with the Banker-Manufacturer as associate editor and left that position to enter the army in the spring of 1918. He became a lieutenant of field artillery, stationed at Camp Taylor, Louisville, Kentucky, and afterward at Camp Jackson, South Carolina, as instructor of gunnery and battery executive officer.

After receiving his discharge Mr. Traver went west and for a few months engaged in silver mining in Arizona. On the 1st of November, 1919, he returned to Milwaukee to accept the position of secretary of the Milwaukee Association of Commerce and through the intervening period has been very active in the upbuilding of this organization.

On the 28th of December, 1920, Mr. Traver was married to Miss Zoa McComb of Wichita, Kansas. They reside at 560 Astor street. Mr. Traver is a member of Phi Gamma Delta fraternity, and is identified with various clubs and patriotic and commercial organizations. He belongs to the Milwaukee Athletic Club, the Milwaukee Press Club and to Alonzo Cudworth Post of the American Legion. He is vice president of the Wisconsin Chapter of the Sons of the American Revolution, a member of the Optimists Club and of the University of Wisconsin Alumni Association, one of the directors of the Wisconsin Commercial Secretaries Association and a member of the National Association of Commercial Organization Secretaries.

Milwaukee county has been signally favored in the class of men who have -occupied her public offices. There have been but few who have been called to positions of public trust who have not been loyal to the work reposed in them, and numbered with the men who are now carefully and wisely directing the business affairs of the county is John J. Cary, who is filling the office of member of the board of supervisors. He was born in the city of Milwaukee, May 8, 1883, and is a son of Richard J. and Catharine (Code) Cary, both of whom were also natives of this city. The family on both sides were early settlers of Milwaukee and of Irish lineage. The father was a cabinetmaker by trade and was associated with the firm of Matthew Brothers, furniture dealers, for a number of years. He afterward engaged in the saloon business and passed away in 1905. His widow is living and yet makes her home in Milwaukee.

John J. Cary was educated in the public and parochial schools of this city, passing through consecutive grades to the high school. On the 2nd of July, 1902, he became associated with the Fidelity & Casualty Company of New York as a messenger boy and he has since filled various positions with the company, being promoted to the office of cashier in 1914. He has served with the company for twenty years and is one of the best known insurance men of the city. His capability and fidelity are plainly indicated by his long connection with the corporation which he represents and he has done a large amount of business, which has brought him to a position of affluence and has added materially to the resources of the company.

On the 23rd of September, 1908, Mr. Cary was married to Miss Lillian Fitzgerald of Kaukauna, Wisconsin, and they have become the parents of two children: Genevieve Patricia, who was born March 17, 1912; and William Francis, born September 3, 1915. The religious faith of the family is that of the Catholic church and Mr. Cary is a member of the Knights of Columbus and the Catholic Order of Foresters. He is also connected with the Benevolent Protective Order of Elks. In April, 1920, he was elected a member of the board of supervisors of Milwaukee county. He is now serving on the committees on finance, public buildings and grounds, sheriffs and coroners and unemployed, these being the most important committees of the board. His public record is highly satisfactory, by reason of the promptness and efficiency with which he discharges his duties and the thoroughness with which he delves to the root of all public matters, learning exactly what is best to do in regard to the business of the county.