“Micah Clarke,” like Mr. Blackmore’s “Lorna Doone,” is a tale of the last romantic rebellion with a base in England—the futile attempt of Monmouth. The big Porthos-like hero is, in some ways, akin to John Ridd; but he occupies, as regards politics and religion, the juste milieu that Sir Walter favored when he wrote history, and assigned to such romantic heroes of his own as Henry Morton, and even Roland Graeme. Though “a simple-hearted unlettered yeoman,” Micah Clarke is really wise with the wisdom of the later Victorian time, and, in one remark, speaks as if he had read Mr. Herbert Spencer with approval, so far as the problems of religion are concerned. 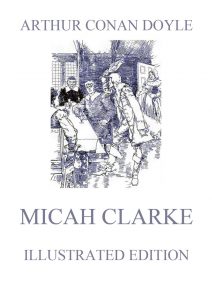 More information on the book (from Wikipedia):

Micah Clarke is an historical adventure novel by British author Arthur Conan Doyle, published in 1889 and set during the Monmouth Rebellion of 1685 in England. The book is a bildungsroman whose protagonist, Micah Clarke, begins as a boy seeking adventure in a rather romantic and naive way, falls under the influence of an older and vastly experienced, world-weary soldier of fortune, and becomes a grown up after numerous experiences, some of them very harrowing. In the process the book also records much of the history of the Monmouth Rebellion, from the point of view of someone living in 17th century England.

Much of the focus is upon the religious dimension of the conflict. The Rebellion was prompted by the desire of many to replace the Catholic King James with a Protestant rival. Micah is the son of a committed Protestant father who sends Micah to fight in the same cause which he himself had fought in during the English Civil War. Micah fights at the Battle of Sedgemoor, which in a narrative aside Doyle obliquely acknowledges to be the last clear-cut pitched battle on open ground between two military forces fought on English soil; Micah also witnesses the execution of James Scott on Tower Hill.

Much is made of the role of Protestant ministers in recruiting the rebel army and in motivating its soldiers. Micah Clarke himself becomes increasingly disillusioned with religious extremism and ultimately expresses the view that toleration is a great good. Conan Doyle had himself been brought up as a Catholic and it is likely that Micah expresses Doyle’s own thoughts on the subject.