American political scientists do not need to be told that James Bryce’s work is one of the most important ever written on the principles and practice of democratic government. More than a century has passed since his masterly description and appreciation of the American Commonwealth put him at the head of all students of American government and politics. He has served as a member of three British cabinets, he has been the British ambassador to the United States, and he has traveled to all quarters of the globe, always keenly interested in the institutions of the lands he visited. Now he embodies the ripest fruits of these years of travel and study in two stout volumes. After some introductory considerations applicable to democratic government in general, he proceeds to a detailed comparison of the working of democracy in various countries, chiefly France, Switzerland, Canada, the United States, Australia, and New Zealand, and concludes with some general observations and reflections on the present and future of democratic government.  This is volume one out of two. 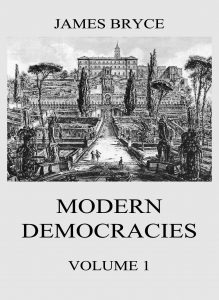