“The Market-Place” throbs with the hum of life, and the wild, mad chorus of the market-place rises from its pages crescendo to a tremendous finale. To transfer the “city” to the printed page is a wonderful achievement. In “The Market-Place” his multitudinous, extravagant, corrupt, but extraordinarily fascinating “city” lives, moves and has its being. Harold Frederic must have had intimate acquaintance with its secrets, for there is not an impossible incident in his novel, and much is a transcript from reality. To many this book will seem the wildest of extravaganzas, a romance of the realms of Zenda—a stirring, exciting romance, too. To those who possess the key to the book, it is a ruthless exposure, a merciless satire. Both as satire and romance it is splendid reading. 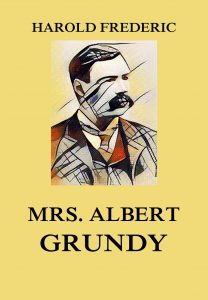