The joint-effort of Mr. Dickens and Mr. Wilkie Collins, apart from its merits or demerits, must excite curiosity and interest. It is clear that in ” No Thoroughfare ” the latter gentleman has had the lion’s share of the labour, whatever of lion’s share may fall to him besides. Mr. Dickens’s portion is merely incidental, though some of his touches are surpassing fine and unmistakably marked. Mr. Collins’s superb inventive faculty shows itself throughout, though under a little restriction here – unfolding, doubling up, coiling, and uncoiling in its brilliant, baffling, serpentine fashion. And the result is exactly such as might be expected. Mr. Wilding is a little over-done, but full of humor ; and Joey Ladle, the cellar-man – who insists on being a good pecking-machine – is admirable. This is one of Joey’s happiest deliverances : – ” Gentlemen, it is all wery well for you that has been accustomed to take your wine into your systems by the conwivial channel of your throttles, to put a lively face upon it ; but I says, ‘ I have been accustomed to take my wine in at the pores of the skin, and took that way, it acts different.’ ” But we mustn’t say more on the matter, at once for our own sake and that of both writers and readers. 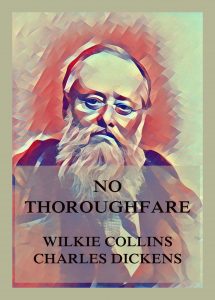 In a court-yard in the City of London, which was No Thoroughfare either for vehicles or foot-passengers; a court-yard diverging from a steep, a slippery, and a winding street connecting Tower Street with the Middlesex shore of the Thames; stood the place of business of Wilding & Co., Wine Merchants.  Probably as a jocose acknowledgment of the obstructive character of this main approach, the point nearest to its base at which one could take the river (if so inodorously minded) bore the appellation Break-Neck-Stairs.  The court-yard itself had likewise been descriptively entitled in old time, Cripple Corner.

Years before the year one thousand eight hundred and sixty-one, people had left off taking boat at Break-Neck-Stairs, and watermen had ceased to ply there.  The slimy little causeway had dropped into the river by a slow process of suicide, and two or three stumps of piles and a rusty iron mooring-ring were all that remained of the departed Break-Neck glories.  Sometimes, indeed, a laden coal barge would bump itself into the place, and certain laborious heavers, seemingly mud-engendered, would arise, deliver the cargo in the neighbourhood, shove off, and vanish; but at most times the only commerce of Break-Neck-Stairs arose out of the conveyance of casks and bottles, both full and empty, both to and from the cellars of Wilding & Co., Wine Merchants.  Even that commerce was but occasional, and through three-fourths of its rising tides the dirty indecorous drab of a river would come solitarily oozing and lapping at the rusty ring, as if it had heard of the Doge and the Adriatic, and wanted to be married to the great conserver of its filthiness, the Right Honourable the Lord Mayor.

Some two hundred and fifty yards on the right, up the opposite hill (approaching it from the low ground of Break-Neck-Stairs) was Cripple Corner.  There was a pump in Cripple Corner, there was a tree in Cripple Corner.  All Cripple Corner belonged to Wilding and Co., Wine Merchants.  Their cellars burrowed under it, their mansion towered over it.  It really had been a mansion in the days when merchants inhabited the City, and had a ceremonious shelter to the doorway without visible support, like the sounding-board over an old pulpit.  It had also a number of long narrow strips of window, so disposed in its grave brick front as to render it symmetrically ugly.  It had also, on its roof, a cupola with a bell in it.

“When a man at five-and-twenty can put his hat on, and can say ‘this hat covers the owner of this property and of the business which is transacted on this property,’ I consider, Mr. Bintrey, that, without being boastful, he may be allowed to be deeply thankful.  I don’t know how it may appear to you, but so it appears to me.”

Thus Mr. Walter Wilding to his man of law, in his own counting-house; taking his hat down from its peg to suit the action to the word, and hanging it up again when he had done so, not to overstep the modesty of nature.

An innocent, open-speaking, unused-looking man, Mr. Walter Wilding, with a remarkably pink and white complexion, and a figure much too bulky for so young a man, though of a good stature.  With crispy curling brown hair, and amiable bright blue eyes.  An extremely communicative man: a man with whom loquacity was the irrestrainable outpouring of contentment and gratitude.  Mr. Bintrey, on the other hand, a cautious man, with twinkling beads of eyes in a large overhanging bald head, who inwardly but intensely enjoyed the comicality of openness of speech, or hand, or heart.

A decanter, two wine-glasses, and a plate of biscuits, stood on the desk.

“You like this forty-five year old port-wine?” said Mr. Wilding.

He laughed again, as he held up his glass and ogled it, at the highly ludicrous idea of giving away such wine.

“And now,” said Wilding, with a childish enjoyment in the discussion of affairs, “I think we have got everything straight, Mr. Bintrey.”

“A housekeeper advertised for—”

“Housekeeper advertised for,” said Bintrey, “‘apply personally at Cripple Corner, Great Tower Street, from ten to twelve’—to-morrow, by the bye.”

“And all charges paid.”

“And all charges paid,” said Bintrey, with a chuckle: probably occasioned by the droll circumstance that they had been paid without a haggle.

“The mention of my late dear mother,” Mr. Wilding continued, his eyes filling with tears and his pocket-handkerchief drying them, “unmans me still, Mr. Bintrey.  You know how I loved her; you (her lawyer) know how she loved me.  The utmost love of mother and child was cherished between us, and we never experienced one moment’s division or unhappiness from the time when she took me under her care.  Thirteen years in all!  Thirteen years under my late dear mother’s care, Mr. Bintrey, and eight of them her confidentially acknowledged son!  You know the story, Mr. Bintrey, who but you, sir!”  Mr. Wilding sobbed and dried his eyes, without attempt at concealment, during these remarks.

Mr. Bintrey enjoyed his comical port, and said, after rolling it in his mouth: “I know the story.”

“She had made up her mind,” said Mr. Bintrey, again turning his wine on his palate, “and she could hold her peace.”  An amused twinkle in his eyes pretty plainly added—“A devilish deal better than you ever will!”

“‘Honour,’” said Mr. Wilding, sobbing as he quoted from the Commandments, “‘thy father and thy mother, that thy days may be long in the land.’  When I was in the Foundling, Mr. Bintrey, I was at such a loss how to do it, that I apprehended my days would be short in the land.  But I afterwards came to honour my mother deeply, profoundly.  And I honour and revere her memory.  For seven happy years, Mr. Bintrey,” pursued Wilding, still with the same innocent catching in his breath, and the same unabashed tears, “did my excellent mother article me to my predecessors in this business, Pebbleson Nephew.  Her affectionate forethought likewise apprenticed me to the Vintners’ Company, and made me in time a free Vintner, and—and—everything else that the best of mothers could desire.  When I came of age, she bestowed her inherited share in this business upon me; it was her money that afterwards bought out Pebbleson Nephew, and painted in Wilding and Co.; it was she who left me everything she possessed, but the mourning ring you wear.  And yet, Mr. Bintrey,” with a fresh burst of honest affection, “she is no more.  It is little over half a year since she came into the Corner to read on that door-post with her own eyes, WILDING AND CO., WINE MERCHANTS.  And yet she is no more!”

“Sad.  But the common lot, Mr. Wilding,” observed Bintrey.  “At some time or other we must all be no more.”  He placed the forty-five year old port-wine in the universal condition, with a relishing sigh.

“So now, Mr. Bintrey,” pursued Wilding, putting away his pocket-handkerchief, and smoothing his eyelids with his fingers, “now that I can no longer show my love and honour for the dear parent to whom my heart was mysteriously turned by Nature when she first spoke to me, a strange lady, I sitting at our Sunday dinner-table in the Foundling, I can at least show that I am not ashamed of having been a Foundling, and that I, who never knew a father of my own, wish to be a father to all in my employment.  Therefore,” continued Wilding, becoming enthusiastic in his loquacity, “therefore, I want a thoroughly good housekeeper to undertake this dwelling-house of Wilding and Co., Wine Merchants, Cripple Corner, so that I may restore in it some of the old relations betwixt employer and employed!  So that I may live in it on the spot where my money is made!  So that I may daily sit at the head of the table at which the people in my employment eat together, and may eat of the same roast and boiled, and drink of the same beer!  So that the people in my employment may lodge under the same roof with me!  So that we may one and all—I beg your pardon, Mr. Bintrey, but that old singing in my head has suddenly come on, and I shall feel obliged if you will lead me to the pump.”

Alarmed by the excessive pinkness of his client, Mr. Bintrey lost not a moment in leading him forth into the court-yard.  It was easily done; for the counting-house in which they talked together opened on to it, at one side of the dwelling-house.  There the attorney pumped with a will, obedient to a sign from the client, and the client laved his head and face with both hands, and took a hearty drink.  After these remedies, he declared himself much better.

“Don’t let your good feelings excite you,” said Bintrey, as they returned to the counting-house, and Mr. Wilding dried himself on a jack-towel behind an inner door.

“Not at all.  Perfectly clear.”

“Where did I leave off, Mr. Bintrey?”

“Well, you left off—but I wouldn’t excite myself, if I was you, by taking it up again just yet.”

“At roast, and boiled, and beer,” answered the lawyer,—“prompting lodging under the same roof—and one and all—”

“Ah!  And one and all singing in the head together—”

“Do you know, I really would not let my good feelings excite me, if I was you,” hinted the lawyer again, anxiously.  “Try some more pump.”

“No occasion, no occasion.  All right, Mr. Bintrey.  And one and all forming a kind of family!  You see, Mr. Bintrey, I was not used in my childhood to that sort of individual existence which most individuals have led, more or less, in their childhood.  After that time I became absorbed in my late dear mother.  Having lost her, I find that I am more fit for being one of a body than one by myself one.  To be that, and at the same time to do my duty to those dependent on me, and attach them to me, has a patriarchal and pleasant air about it.  I don’t know how it may appear to you, Mr Bintrey, but so it appears to me.”

“It is not I who am all-important in the case, but you,” returned Bintrey.  “Consequently, how it may appear to me is of very small importance.”