The first of the chapters in the book is an antiquarian chapter; but the “Three Literary Epochs” of the second chapter — the epoch of the North American Review, that of the Dial, and that of the Atlantic Monthly — were epochs all in some manner familiar to Higginson, and a part of which he was; the last three chapters he dedicated to the famous writers Holmes, Longfellow and Lowell. 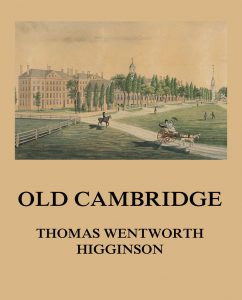 Cambridge is a city in Middlesex County, Massachusetts, and is a part of the Boston metropolitan area.

Situated directly north of the city of Boston, across the Charles River, it was named in honor of the University of Cambridge in the United Kingdom, an important center of the Puritan theology embraced by the town’s founders.

Harvard University and the Massachusetts Institute of Technology (MIT), two of the world’s most prestigious universities, are located in Cambridge, as was Radcliffe College, one of the leading colleges for women in the United States until it merged with Harvard.

According to the 2010 Census, the city’s population was 105,162. As of July 2014, it was the fifth most populous city in the state, behind Boston, Worcester, Springfield and Lowell. Cambridge was one of the two seats of Middlesex County prior to the abolition of county government in 1997; Lowell was the other.

Kendall Square in Cambridge has been called “the most innovative square mile on the planet”, in reference to the high concentration of entrepreneurial start-ups and quality of innovation which have emerged in the vicinity of the square since 2010.