“In these times of ours,” are the opening words of this book, which was published in England in 1864-65. The scene is laid in London and its immediate neighborhood. All the elaborate machinery dear to Dickens’s heart is here introduced. There is the central story of Our Mutual Friend, himself the young heir to the vast Harmon estate, who buries his identity and assumes the name of John Rokesmith, that he may form his own judgment of the young woman whom he must marry in order to claim his fortune; there is the other story of the poor bargeman’s daughter, and her love for reckless Eugene Wrayburn, the idol of society; and uniting these two threads is the history of Mr. and Mrs. Boffin, the ignorant, kindhearted couple, whose innocent ambitions, and benevolent use of the money intrusted to their care, afford the author opportunity for the humor and pathos of which he was a master. Among the characters which this story has made famous are Miss Jenny Wren, the doll’s dressmaker, a little, crippled creature whose love for Lizzie Hexam transforms her miserable life; Bradley Headstone, the schoolmaster, suffering torments because of his jealousy of Eugene Wrayburn, and helpless under the careless contempt of that trained adversary— dying at last in an agony of defeat at his failure to kill Eugene; and the triumph of Lizzie’s love over the social difference between her and her lover; Bella Wilfer, “the boofer lady,” cured of her longing for riches and made John Harmon’s happy wife by the plots and plans of the Golden Dustman … 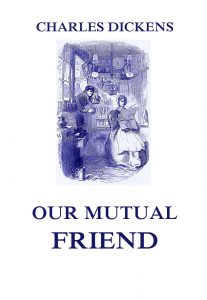 Plot summary of Our Mutual Friend (from Wikipedia):

Having made his fortune from London’s rubbish, a rich misanthropic miser dies, estranged from all except his faithful employees Mr and Mrs Boffin. By his will, his fortune goes to his estranged son John Harmon, who is to return from where he has settled abroad (possibly in South Africa) to claim it, on condition that he marries a woman he has never met, Miss Bella Wilfer. The implementation of the will is in the charge of the solicitor, Mortimer Lightwood, who has no other practice.

Before the son and heir can claim his inheritance, he goes missing, presumed drowned, at the end of his journey back to London. A body is found in the Thames by Gaffer Hexam, a waterman who makes his living by retrieving corpses and robbing them of valuables, before handing them over to the authorities. Papers in the pockets of the drowned man identify him as the heir, John Harmon. Present at the identification is a mysterious young man, who gives his name as Julius Handford and then disappears.

By the terms of the miser’s will, the whole estate then devolves upon Mr and Mrs Boffin, naïve and good-hearted people who wish to enjoy it for themselves and to share it with others. They take the disappointed bride of the drowned heir, Miss Wilfer, into their household, and treat her as their pampered child and heiress. They also accept an offer from Julius Handford, now going under the name of John Rokesmith, to serve as their confidential secretary and man of business, at no salary. Rokesmith uses this position to watch and learn everything about the Boffins, Miss Wilfer, and the aftershock of the drowning of the heir John Harmon. Mr Boffin engages a one-legged ballad-seller, Silas Wegg, to read aloud to him in the evenings, and Wegg tries to take advantage of his position and of Mr Boffin’s good heart to obtain other advantages from the wealthy dustman. Having persuaded Mr Boffin to move to a larger house, he himself takes possession of their former home, in the yard of which stand several mounds of “dust” remaining from Mr Harmon’s business. Wegg hopes to find hidden treasure there.

Gaffer Hexam, who found the body, is accused of murdering John Harmon by a fellow-waterman, Roger “Rogue” Riderhood, who is bitter at having been cast off as Hexam’s partner on the river, and who covets the large reward offered in relation to the murder. As a result of the accusation, Hexam is shunned by his fellows on the river, and excluded from The Six Jolly Fellowship-Porters, the public house they frequent. Hexam’s young son, the clever but priggish Charley Hexam, leaves his father’s house to better himself at school, and to train to be a schoolmaster, encouraged by his sister, the beautiful Lizzie Hexam. Meanwhile, Lizzie stays with her father, to whom she is devoted.

Before Riderhood can claim the reward for his false allegation against Hexam, Hexam is found drowned himself. Lizzie Hexam becomes the lodger of a doll’s dressmaker, a disabled teenager nicknamed “Jenny Wren”. Jenny’s alcoholic father lives with them, and is treated by Jenny as a child. Lizzie has caught the eye of the work-shy barrister, Eugene Wrayburn, who noticed her when accompanying his friend, the Harmon solicitor Mortimer Lightwood, to question Gaffer Hexam. Wrayburn falls in love with her. However, he soon gains a violent rival in Bradley Headstone, the schoolmaster of Charley Hexam. Charley wants his sister to be under obligation to no one but him, and tries to arrange lessons for her with Headstone, only to find that Wrayburn has already engaged a teacher for both Lizzie and Jenny. Headstone quickly becomes enamoured with Lizzie, and makes an unsuccessful proposal. Angered by Wrayburn’s dismissive attitude towards him, Headstone comes to see him as the source of all his misfortunes, and takes to following him around the streets of London at night. Lizzie, fearing a violent quarrel between them, and unsure of Wrayburn’s intentions toward her (Wrayburn admits to Lightwood that he himself doesn’t know either), flees both men, getting work up-river from London.

Mr and Mrs Boffin attempt to adopt a young orphan, previously in the care of his great-grandmother, Betty Higden, but the boy dies before the adoption can proceed. Mrs Higden minds children for a living, assisted by a foundling known as Sloppy. She has a terror of the workhouse. When Lizzie Hexam finds Mrs Higden dying, she meets the Boffins and Bella Wilfer. In the meantime Eugene Wrayburn has obtained information about Lizzie’s whereabouts from Jenny’s father and has tracked the object of his affections. Bradley Headstone attempts to enlist the help of Riderhood, now working as a lock-keeper, to find Lizzie. After following Wrayburn up river and seeing him with Lizzie, Headstone attacks Wrayburn and leaves him for dead. Lizzie finds him in the river and rescues him. Wrayburn, thinking he will die anyway, marries Lizzie to save her reputation. When he survives, he is glad that this has brought him into a loving marriage, albeit with a social inferior. He had not cared about the social gulf between them but Lizzie had and would not otherwise have married him.

Rokesmith has clearly fallen in love with Bella Wilfer but she cannot bear to accept him, having insisted that she will marry only for money. Mr Boffin appears to be corrupted by his wealth and becomes a miser. He also begins to treat his secretary Rokesmith with contempt and cruelty. This arouses the sympathy of Bella Wilfer, and she stands up for Rokesmith when Mr Boffin dismisses him for aspiring to marry her. They marry and live happily, in relatively poor circumstances. Bella soon conceives.

Meanwhile, Bradley Headstone has tried to put the blame for his assault on Wrayburn onto Rogue Riderhood, by dressing in similar clothes when doing the deed. Riderhood realises this and attempts to blackmail Headstone. Headstone, overcome with the hopelessness of his situation, especially after discovering that Wrayburn has survived and has married Lizzie, is seized with a self-destructive urge and flings himself into the lock, pulling Riderhood with him so that both are drowned.

The one-legged parasite Silas Wegg has, with help from Mr Venus, an “articulator of bones”, searched the mounds of dust and discovered a will subsequent to the one which has given the Boffins the whole of the Harmon estate. By the later will, the estate goes to the Crown. Wegg decides to blackmail Boffin with this will, but Venus has second thoughts and reveals all to Boffin.

It has gradually become clear to the reader that John Rokesmith is the missing heir, John Harmon. He had been robbed of his clothes and possessions by the man later found drowned and mis-identified as him. Rokesmith/Harmon has been maintaining his alias to find out more about Bella Wilfer before committing himself to marry her as required by the terms of his father’s will. Now that she has married him, believing him to be poor, he can throw off his disguise. He does so and it is revealed that Mr Boffin’s apparent miserliness and ill-treatment of his secretary was part of a scheme to test Bella’s motives and affections.

When Wegg attempts to clinch his blackmail on the basis of the later will disinheriting Boffin, Boffin turns the tables by revealing a still later will by which the fortune is granted to Boffin even at young John Harmon’s expense. The Boffins are determined to make John Harmon and his bride Bella Wilfer their heirs anyway so all ends well, except for the villain Wegg, who is carted away by Sloppy. Sloppy himself becomes friendly with Jenny Wren, whose father has died.

A sub-plot involves the activities of the devious Mr and Mrs Lammle, a couple who have married one another for money, only to discover that neither of them has any. They attempt to obtain financial advantage by pairing off their acquaintance, Fledgeby, first with the heiress Georgiana Podsnap and later with Bella Wilfer. Fledgeby is an extortioner and money-lender, who uses the kindly old Jew, Riah, as his cover, temporarily causing Riah to fall out with his friend and protégée Jenny Wren. Eventually, all attempts at improving their financial situation having failed, the Lammles leave England, Mr Lammle having first administered a sound beating to Fledgeby.