“Persuasion” represents the ripest development of Jane Austen’s powers, that latest phase of her thoughts and feelings. It is a novel which, while not wanting in the several excellences of those which preceded it, has a mellower tone and a more finished grace of style than any of the others. It was written at a time when bodily strength had given place to weakness; and although her mind was more active than ever, her physical condition insensibly influenced her thought, giving this latest of her books that deeper note of feeling, that finer touch of sympathy and tenderness, which make “Persuasion” the greatest of all her works. – Oscar Fay Adams. It was Miss Austen’s last story, and has more depth of feeling and pathos than most of hers. . . . The delicate miniature painting of the characters in these tales is apt not to be appreciated by the young and the tone of county society of that day disgusts them; but as they grow older they perceive how much ability and insight is displayed in the work, and esteem the forbearance, sweetness, and self-restraint of such a heroine as Anne.- Charlotte M. Yonge. 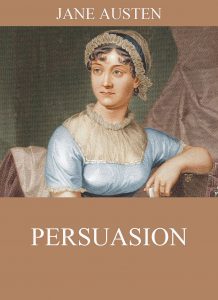 Precisely such had the paragraph originally stood from the printer’s hands; but Sir Walter had improved it by adding, for the information of himself and his family, these words, after the date of Mary’s birth–“Married, December 16, 1810, Charles, son and heir of Charles Musgrove, Esq. of Uppercross, in the county of Somerset,” and by inserting most accurately the day of the month on which he had lost his wife.

Then followed the history and rise of the ancient and respectable family, in the usual terms; how it had been first settled in Cheshire; how mentioned in Dugdale, serving the office of high sheriff, representing a borough in three successive parliaments, exertions of loyalty, and dignity of baronet, in the first year of Charles II, with all the Marys and Elizabeths they had married; forming altogether two handsome duodecimo pages, and concluding with the arms and motto:–“Principal seat, Kellynch Hall, in the county of Somerset,” and Sir Walter’s handwriting again in this finale:–

Vanity was the beginning and the end of Sir Walter Elliot’s character; vanity of person and of situation. He had been remarkably handsome in his youth; and, at fifty-four, was still a very fine man. Few women could think more of their personal appearance than he did, nor could the valet of any new made lord be more delighted with the place he held in society. He considered the blessing of beauty as inferior only to the blessing of a baronetcy; and the Sir Walter Elliot, who united these gifts, was the constant object of his warmest respect and devotion.

His good looks and his rank had one fair claim on his attachment; since to them he must have owed a wife of very superior character to any thing deserved by his own. Lady Elliot had been an excellent woman, sensible and amiable; whose judgement and conduct, if they might be pardoned the youthful infatuation which made her Lady Elliot, had never required indulgence afterwards.–She had humoured, or softened, or concealed his failings, and promoted his real respectability for seventeen years; and though not the very happiest being in the world herself, had found enough in her duties, her friends, and her children, to attach her to life, and make it no matter of indifference to her when she was called on to quit them.–Three girls, the two eldest sixteen and fourteen, was an awful legacy for a mother to bequeath, an awful charge rather, to confide to the authority and guidance of a conceited, silly father. She had, however, one very intimate friend, a sensible, deserving woman, who had been brought, by strong attachment to herself, to settle close by her, in the village of Kellynch; and on her kindness and advice, Lady Elliot mainly relied for the best help and maintenance of the good principles and instruction which she had been anxiously giving her daughters.

This friend, and Sir Walter, did not marry, whatever might have been anticipated on that head by their acquaintance. Thirteen years had passed away since Lady Elliot’s death, and they were still near neighbours and intimate friends, and one remained a widower, the other a widow.

That Lady Russell, of steady age and character, and extremely well provided for, should have no thought of a second marriage, needs no apology to the public, which is rather apt to be unreasonably discontented when a woman does marry again, than when she does not; but Sir Walter’s continuing in singleness requires explanation. Be it known then, that Sir Walter, like a good father, (having met with one or two private disappointments in very unreasonable applications), prided himself on remaining single for his dear daughters’ sake. For one daughter, his eldest, he would really have given up any thing, which he had not been very much tempted to do. Elizabeth had succeeded, at sixteen, to all that was possible, of her mother’s rights and consequence; and being very handsome, and very like himself, her influence had always been great, and they had gone on together most happily. His two other children were of very inferior value. Mary had acquired a little artificial importance, by becoming Mrs Charles Musgrove; but Anne, with an elegance of mind and sweetness of character, which must have placed her high with any people of real understanding, was nobody with either father or sister; her word had no weight, her convenience was always to give way–she was only Anne.

To Lady Russell, indeed, she was a most dear and highly valued god-daughter, favourite, and friend. Lady Russell loved them all; but it was only in Anne that she could fancy the mother to revive again.

A few years before, Anne Elliot had been a very pretty girl, but her bloom had vanished early; and as even in its height, her father had found little to admire in her, (so totally different were her delicate features and mild dark eyes from his own), there could be nothing in them, now that she was faded and thin, to excite his esteem. He had never indulged much hope, he had now none, of ever reading her name in any other page of his favourite work. All equality of alliance must rest with Elizabeth, for Mary had merely connected herself with an old country family of respectability and large fortune, and had therefore given all the honour and received none: Elizabeth would, one day or other, marry suitably.

It sometimes happens that a woman is handsomer at twenty-nine than she was ten years before; and, generally speaking, if there has been neither ill health nor anxiety, it is a time of life at which scarcely any charm is lost. It was so with Elizabeth, still the same handsome Miss Elliot that she had begun to be thirteen years ago, and Sir Walter might be excused, therefore, in forgetting her age, or, at least, be deemed only half a fool, for thinking himself and Elizabeth as blooming as ever, amidst the wreck of the good looks of everybody else; for he could plainly see how old all the rest of his family and acquaintance were growing. Anne haggard, Mary coarse, every face in the neighbourhood worsting, and the rapid increase of the crow’s foot about Lady Russell’s temples had long been a distress to him.

Elizabeth did not quite equal her father in personal contentment. Thirteen years had seen her mistress of Kellynch Hall, presiding and directing with a self-possession and decision which could never have given the idea of her being younger than she was. For thirteen years had she been doing the honours, and laying down the domestic law at home, and leading the way to the chaise and four, and walking immediately after Lady Russell out of all the drawing-rooms and dining-rooms in the country. Thirteen winters’ revolving frosts had seen her opening every ball of credit which a scanty neighbourhood afforded, and thirteen springs shewn their blossoms, as she travelled up to London with her father, for a few weeks’ annual enjoyment of the great world. She had the remembrance of all this, she had the consciousness of being nine-and-twenty to give her some regrets and some apprehensions; she was fully satisfied of being still quite as handsome as ever, but she felt her approach to the years of danger, and would have rejoiced to be certain of being properly solicited by baronet-blood within the next twelvemonth or two. Then might she again take up the book of books with as much enjoyment as in her early youth, but now she liked it not. Always to be presented with the date of her own birth and see no marriage follow but that of a youngest sister, made the book an evil; and more than once, when her father had left it open on the table near her, had she closed it, with averted eyes, and pushed it away.

She had had a disappointment, moreover, which that book, and especially the history of her own family, must ever present the remembrance of. The heir presumptive, the very William Walter Elliot, Esq., whose rights had been so generously supported by her father, had disappointed her.