Child stories by Frances Hodgson Burnett are among the best of their kind. Those terrible “Two Days in the Life of Piccino” are enough to make one shake—with laughter. Piccino was a “Gesu bambino,” pretty as a Christ-child in a picture, who lived with his parents, his sister Maria, and a donkey and a dog, in the outskirts of Ceriani, an old town of the Italian Riviera, and who was early initiated into the art and mystery of drawing soldi out of foreigners’ pockets. A rich English lady took a fancy to see just how pretty a bambino Piccino might be if he were washed, and bought him for the purpose. Then began his frightful two days of scrubbings and rubbings, of indigestible mutton-chops and destitution of garlic, from which he ran away, and which furnished him with matter to talk and think over for the rest of his life. The other stories tell how “The Captain’s Youngest ” prevented his sister’s elopement; how ” Little Betty’s Kitten ” had excellent times with her mistress, and “How Fauntleroy Occurred”—that is, in the most natural way in the world. They are none the worse for being a trifle “grown-up,” and for reminding one a little of Ouida. 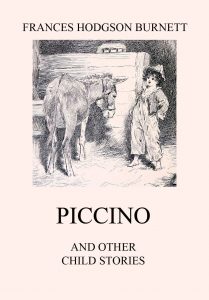 Piccino (and other Child Stories).