The author discloses an intimate picture of Indian life and character, the Indians being the desert Cahuillas and their noted chief—Cabazon. She also tells of the early Mormon pioneers, with some reference to Capt. Jefferson Hunt and the Death Valley Party, and more particularly to the Brier family. Mrs. Crafts’ book makes for interesting reading; and it may well be considered one of the most important among the relatively few source records available concerning the early history of the San Bernardino Valley. The author moved into the Valley in 1854, at the age of 29 and lived here for the remainder of her long, eventful life. Her book, now scarce and valuable, was written in her 80th year. 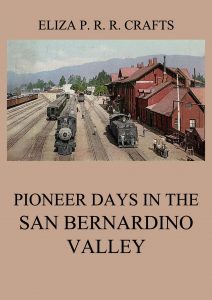 With an area of 20,105 square miles, San Bernardino County is the largest county in the United States by area, although some of Alaska’s boroughs and census areas are larger. It is larger than each of the nine smallest states, larger than the four smallest states combined, and larger than 70 different sovereign nations.

Located in southeast California, the thinly populated deserts and mountains of this vast county stretch from where the bulk of the county population resides in two Census County Divisions, some 1,422,745 people as of the 2010 Census, covering the 450 square miles (1,166 km2) south of the San Bernardino Mountains in San Bernardino Valley, to the Nevada border and the Colorado River.