The author’s main zeal is for the Cushite race, for which he is as zealous as is Max Muller for the younger Aryan dynasty. He holds that the earliest civilization of which we have any trace, dating back to 7000 B. c. at the latest, was that commonly called the Ethiopic, but which really had its seat on the Arabian side of the Red Sea, and had no connection with over the way. Of this civilization, Egypt and Chaldea were but the children; it colonized the valleys of the Nile and Euphrates; it occupied India, Western Asia, and extensive regions of Africa. Commerce, manufactures, and astronomy all reached a high development during that great epoch of colonization. It was a branch of this race which established what is now called the Age of Bronze in Western Europe, and which built the temples of Abury and Stonehenge. The Cushites taught the Northern nations the worship of Baal, whose midnight fires on midsummer eve are hardly yet extinguished in England, and have testified to that remote idolatry as surely as the lingering fifth of November fires on our Essex hills still keep alive the memory of Guy Fawkes. 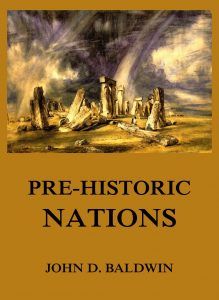 Baldwin conducted correspondence with many notable thinkers of his time, including Ralph Waldo Emerson, Charles Darwin, James Russell Lowell, and particularly his friend Charles Sumner. He accepted Darwin’s theory of evolution while maintaining a belief in the divine origin of “first forms.”

In 1865 he was elected a corporate member of the American Oriental Society. Baldwin’s anthropological writing posited the origins of human civilization as arising among an Arabian or Northeast African people, the Cushites, in pre-historic times.

In Ancient America, In Notes on American Archaeology he also speculated on the origins of the “Mound Builder” people then believed to have constructed the famous mounds around the Mississippi and Ohio River Valleys, suggesting that they had been an aboriginal people who had migrated northwards from Central America or Mexico. He rejected the then-common notion that they had been a lost European, Semitic, or Asiatic people who had been wiped out by the North American Indians, asserting on the contrary that the Mounds were “wholly original, wholly American” and “did not come from the Old World”. He did, however, still subscribe to the idea that these “Mound Builders” were not the same as the American Indian inhabitants of the region at that time, who he believed were a separate race originating in Asia.