The heroine of the ‘Ragged Lady’ is a New England type of young girl – strong, pure, uneducated, loyal, proud; a girl whose head always governs her heart, and whose moral sense permits no confusion in distinguishing right from wrong. She sees and acts, and by her quickness of apprehension causes confusion in the minds of those who differ with her. Into the world, under the care, or rather at the whim, of a vulgar, rich, selfish old woman, this little New England girl, who had never seen a city, goes. Her new life begins, but is never wholly separated from the days of semi-service in a summer hotel. The people of that summer drift across her life in the moments of her greatest social success, which her own charm and unconsciousness make. The little country girl learns worldly wisdom and social arts to meet that world, and protects the white light of truth lighted by a New England ancestor. The ‘Ragged Lady’ presents average life. There are neither great loves nor hates, nor temptations nor tragedies, save those of temperament. Perhaps Mr. Howells would claim that these are life’s real tragedies. This novel, with its definiteness of touch, its sense of values, its truth to life, is one of the most artistic of Mr. Howells’s books. 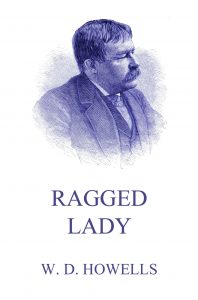 It was their first summer at Middlemount and the Landers did not know the roads. When they came to a place where they had a choice of two, she said that now he must get out of the carry-all and ask at the house standing a little back in the edge of the pine woods, which road they ought to take for South Middlemount. She alleged many cases in which they had met trouble through his perverse reluctance to find out where they were before he pushed rashly forward in their drives. Whilst she urged the facts she reached forward from the back seat where she sat, and held her hand upon the reins to prevent his starting the horse, which was impartially cropping first the sweet fern on one side and then the blueberry bushes on the other side of the narrow wheel-track. She declared at last that if he would not get out and ask she would do it herself, and at this the dry little man jerked the reins in spite of her, and the horse suddenly pulled the carry-all to the right, and seemed about to overset it.

“Oh, what are you doing, Albe’t?” Mrs. Lander lamented, falling helpless against the back of her seat. “Haven’t I always told you to speak to the hoss fust?”

“He wouldn’t have minded my speakin’,” said her husband. “I’m goin’ to take you up to the dooa so that you can ask for youaself without gettin’ out.”

This was so well, in view of Mrs. Lander’s age and bulk, and the hardship she must have undergone, if she had tried to carry out her threat, that she was obliged to take it in some sort as a favor; and while the vehicle rose and sank over the surface left rough, after building, in front of the house, like a vessel on a chopping sea, she was silent for several seconds.

The house was still in a raw state of unfinish, though it seemed to have been lived in for a year at least. The earth had been banked up at the foundations for warmth in winter, and the sheathing of the walls had been splotched with irregular spaces of weather boarding; there was a good roof over all, but the window-casings had been merely set in their places and the trim left for a future impulse of the builder. A block of wood suggested the intention of steps at the front door, which stood hospitably open, but remained unresponsive for some time after the Landers made their appeal to the house at large by anxious noises in their throats, and by talking loud with each other, and then talking low. They wondered whether there were anybody in the house; and decided that there must be, for there was smoke coming out of the stove pipe piercing the roof of the wing at the rear.

Mr. Lander brought himself under censure by venturing, without his wife’s authority, to lean forward and tap on the door-frame with the butt of his whip. At the sound, a shrill voice called instantly from the region of the stove pipe, “Clem! Clementina? Go to the front dooa! The’e’s somebody knockin’.” The sound of feet, soft and quick, made itself heard within, and in a few moments a slim maid, too large for a little girl, too childlike for a young girl, stood in the open doorway, looking down on the elderly people in the buggy, with a face as glad as a flower’s. She had blue eyes, and a smiling mouth, a straight nose, and a pretty chin whose firm jut accented a certain wistfulness of her lips. She had hair of a dull, dark yellow, which sent out from its thick mass light prongs, or tendrils, curving inward again till they delicately touched it. Her tanned face was not very different in color from her hair, and neither were her bare feet, which showed well above her ankles in the calico skirt she wore. At sight of the elders in the buggy she involuntarily stooped a little to lengthen her skirt in effect, and at the same time she pulled it together sidewise, to close a tear in it, but she lost in her anxiety no ray of the joy which the mere presence of the strangers seemed to give her, and she kept smiling sunnily upon them while she waited for them to speak.

“Oh!” Mrs. Lander began with involuntary apology in her tone, “we just wished to know which of these roads went to South Middlemount. We’ve come from the hotel, and we wa’n’t quite ce’tain.”

The girl laughed as she said, “Both roads go to South Middlemount’m; they join together again just a little piece farther on.”

The girl and the woman in their parlance replaced the letter ‘r’ by vowel sounds almost too obscure to be represented, except where it came last in a word before a word beginning with a vowel; there it was annexed to the vowel by a strong liaison, according to the custom universal in rural New England.

“Yes’m,” answered the girl. “It’s a kind of tu’nout in the wintatime; or I guess that’s what made it in the beginning; sometimes folks take one hand side and sometimes the other, and that keeps them separate; but they’re really the same road, ‘m.”

“Thank you,” said Mrs. Lander, and she pushed her husband to make him say something, too, but he remained silently intent upon the child’s prettiness, which her blue eyes seemed to illumine with a light of their own. She had got hold of the door, now, and was using it as if it was a piece of drapery, to hide not only the tear in her gown, but somehow both her bare feet. She leaned out beyond the edge of it; and then, at moments she vanished altogether behind it.

Since Mr. Lander would not speak, and made no sign of starting up his horse, Mrs. Lander added, “I presume you must be used to havin’ people ask about the road, if it’s so puzzlin’.”

“O, yes’m,” returned the girl, gladly. “Almost every day, in the summatime.”

“You have got a pretty place for a home, he’e,” said Mrs. Lander.

“Well, it will be when it’s finished up.” Without leaning forward inconveniently Mrs. Lander could see that the partitions of the house within were lathed, but not plastered, and the girl looked round as if to realize its condition and added, “It isn’t quite finished inside.”

“We wouldn’t, have troubled you,” said Mrs. Lander, “if we had seen anybody to inquire of.”

“There are not many otha houses about, very nea’, but I don’t suppose you get lonesome; young folks are plenty of company for themselves, and if you’ve got any brothas and sistas—”

There was a stir in the bushes about the carriage, and Mrs. Lander was aware for an instant of children’s faces looking through the leaves at her and then flashing out of sight, with gay cries at being seen. A boy, older than the rest, came round in front of the horse and passed out of sight at the corner of the house.

Lander now leaned back and looked over his shoulder at his wife as if he might hopefully suppose she had come to the end of her questions, but she gave no sign of encouraging him to start on their way again.

“That your brotha, too?” she asked the girl.

“I don’t know,” said Mrs. Lander thoughtfully, “as I noticed how many boys there were, or how many girls.”

“I’ve got two sistas, and three brothas, ‘m,” said the girl, always smiling sweetly. She now emerged from the shelter of the door, and Mrs. Lander perceived that the slight movements of such parts of her person as had been evident beyond its edge were the effects of some endeavor at greater presentableness. She had contrived to get about her an overskirt which covered the rent in her frock, and she had got a pair of shoes on her feet. Stockings were still wanting, but by a mutual concession of her shoe-tops and the border of her skirt, they were almost eliminated from the problem. This happened altogether when the girl sat down on the threshold, and got herself into such foreshortening that the eye of Mrs. Lander in looking down upon her could not detect their absence. Her little head then showed in the dark of the doorway like a painted head against its background.

“You haven’t been livin’ here a great while, by the looks,” said Mrs. Lander. “It don’t seem to be clea’ed off very much.”

“We’ve got quite a ga’den-patch back of the house,” replied the girl, “and we should have had moa, but fatha wasn’t very well, this spring; he’s eva so much better than when we fust came he’e.”

“It has the name of being a very healthy locality,” said Mrs. Lander, somewhat discontentedly, “though I can’t see as it’s done me so very much good, yit. Both your payrints livin’?”

“And your mother, is she real rugged? She need to be, with such a flock of little ones!”

“Yes, motha’s always well. Fatha was just run down, the doctas said, and ought to keep more in the open air. That’s what he’s done since he came he’e. He helped a great deal on the house and he planned it all out himself.”

“No’m; but he’s—I don’t know how to express it—he likes to do every kind of thing.”

“But he’s got some business, ha’n’t he?” A shadow of severity crept over Mrs. Lander’s tone, in provisional reprehension of possible shiftlessness.

“Yes’m. He was a machinist at the Mills; that’s what the doctas thought didn’t agree with him. He bought a piece of land he’e, so as to be in the pine woods, and then we built this house.”

“When did you say you came?”

“Well! What did you do befoa you built this house?”

“We camped the first summa.”