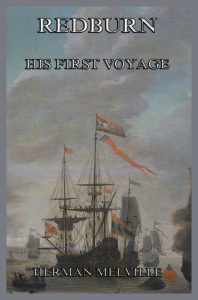 Unable to find employment at home, young Wellingborough Redburn signs on the Highlander, a merchantman out of New York City bound for Liverpool, England. Representing himself as the “son of a gentleman” and expecting to be treated as such, he discovers that he is just a green hand, a “boy”, the lowest rank on the ship, assigned all the duties no other sailor wants, like cleaning out the “pig-pen”, a longboat that serves as a shipboard sty. The first mate promptly nicknames him “Buttons” for the shiny ones on his impractical jacket. Redburn quickly grasps the workings of social relations aboard ship. As a common seaman he can have no contact with those “behind the mast” where the officers command the ship. Before the mast, where the common seaman work and live, a bully named Jackson, the best seaman aboard, rules through fear with an iron fist. Uneducated yet cunning, with broken nose and squinting eye, he is described as “a Cain afloat, branded on his yellow brow with some inscrutable curse and going about corrupting and searing every heart that beat near him.” Redburn soon experiences all the trials of a greenhorn: seasickness, scrubbing decks, climbing masts in the dead of night to unfurl sails, cramped quarters, and bad food.

When the ship lands in Liverpool he is given liberty ashore. He rents a room and walks the city every day. One day in a street called Launcelott’s Hey he hears “a feeble wail” from a cellar beneath an old warehouse and looking into it sees “the figure of what had been a woman. Her blue arms folded to her livid bosom two shrunken things like children, that leaned toward her, one on each side. At first I knew not whether they were alive or dead. They made no sign; they did not move or stir; but from the vault came that soul-sickening wail.” He runs for help but is met with indifference by a ragpicker, a porter, his landlady, even by a policeman who tells him to mind his own business. He returns with some bread and cheese and drops them into the vault to the mother and children, but they are too weak to lift it to their mouths. The mother whispers “water” so he runs and fills his tarpaulin hat at an open hydrant. The girls drink and revive enough to nibble some cheese. He clasps the mother’s arms and pulls them aside to see “a meager babe, the lower part of its body thrust into an old bonnet. Its face was dazzlingly white, even in its squalor; but the closed eyes looked like balls of indigo. It must have been dead for some hours.” Judging them beyond the point at which medicine could help, he returns to his room. A few days later he revisits the street and finds the vault empty: “In place of the woman and children, a heap of quick-lime was glistening.”

On the docks he meets Harry Bolton, a dandy who claims to be a sailor looking for a job, and Redburn helps him procure a berth on the Highlander for the return voyage. They become fast friends and make a trip to London where they visit a luxurious private club, Aladdin’s Palace, with an exotic environment Redburn struggles to make sense of, concluding it must be a gambling house. The ship soon departs for New York and Bolton’s deficits as sailor become apparent. Redburn suspects that Bolton has never been to sea before and Bolton is tormented by the crew. Jackson, after being ill in bed for four weeks, returns to active duty: he climbs to the topsail yard, then suddenly vomits “a torrent of blood from his lungs”, and falls headfirst into the sea and disappears. The crew never speak his name again. Reaching port, Redburn heads for his home and Bolton signs on a whaler. Redburn later hears that Bolton, far out in the Pacific, fell over the side and drowned.