The title of this second volume in the ‘Aunt Jo’s Scrap-Bag’ series is imposed upon a record of the author’s journeyings in Europe, which might as appropriately have been called ” Lunch Box,” or ” Sherry Flask,” so far as the uninformed reader is concerned. In due time, however, he is apprised that the title “Shawl Straps” is supposed to indicate that the travelers – for there were three of them – abandoned their baggage train and made their campaign with personal equipage as meagre as that of Gen. Grant in his movement against Vicksburg – one clean shirt and a tooth-brush. In fact, the three lone females did, at a certain stage in their journey, desert their “Saratogas,” and for a season travelled in light order. That this season was a brief one, it is hardly necessary to say; a woman divorced from her trunken voyage, presents one of the most painful exhibitions of anguish that human nature ever affords. It is worthy of note that the chapters of the book which treat of this trunkless – we had almost said truncated – time, are far less spirited and jolly than their associates which deal with a period of habilimental opulence, and reflect faithfully the serene and self-satisfied condition of the author’s mind. 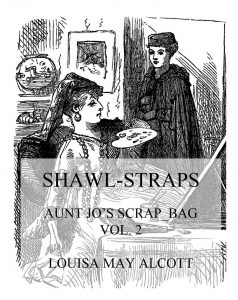 ‘On the first day of February we three will sail from Boston for Messina, in the little fruit-ship “Wasp.” We shall probably be a month going, unless we cross in a gale as I did, splitting sails every night, and standing on our heads most of the way,’ said Amanda, folding up her maps with an air of calm decision.

‘Hurrah! what fun!’ cried Matilda, waving a half-finished dressing-case over her head.

But Lavinia, with one sepulchral groan, fell flat upon her bed, and lay there, dumb with the horrors of such a voyage.

‘Just the thing for you, my poor old dear. Think of the balmy airs of Sicily, the oranges, the flowers. Then a delicious month or two at Sorrento, with no east winds, no slush, no spring cleaning. We shall be as merry as grigs, and get as buxom as dairy-maids in a month,’ said the sprightly Amanda.

‘You promised to go, and if you back out we are lost, for we must have a duenna. You can lie round in Europe just as well as here, and I have no doubt it will do you a world of good,’ added Matilda.

‘I shall keep my word; but you will bury me in the Atlantic, so make up your minds to it. Do you suppose that I, a poor, used-up old invalid, who can’t look at a sail-boat without a qualm, can survive thirty days of standing on my head, and thirty nights of sail-splitting, as we go slamming and lurching across two or three awful oceans?’ demanded Lavinia, with the energy of despair.

Before anyone could reply, Amanda’s little Mercury appeared with a note.

‘The “Wasp” will not take passengers, and no other fruit-ship sails this spring,’ read Amanda.

‘Be calm: we shall go, sooner or later, if I buy a ship and sail her myself;’ with which indomitable remark Amanda went forth to grapple with and conquer untoward circumstances.

A month of plans, vicissitudes, and suspense followed, during which Amanda strove manfully; Matilda suffered agonies of hope and fear; and Lavinia remained a passive shuttlecock, waiting to be tossed wherever Fate’s battledore chose to send her.

‘Exactly two weeks from to-day, we sail with a party of friends in the French steamer “Lafayette,” from New York for Brest. Will you be ready?’ demanded Amanda, after a protracted wrestle with aforesaid adverse circumstances.

‘But that is exactly what we didn’t mean to do. It’s expensive and fashionable; France and not Italy, north and not south.’

‘That’s because I’m in the party. If you take a Jonah nothing will go well. Leave me behind, and you will have a charming trip,’ said Lavinia, who had an oyster-like objection to being torn from her bed.

‘No matter, we are going, live or die, sink or swim; and I shall expect to meet you, all booted and spurred and fit for the fight, April first,’ said the unwavering Amanda.

‘A most appropriate day for three lone women to start off on a wild-goose chase after health and pleasure,’ groaned Lavinia from among her pillows.

‘Very well, then; I leave you now, and shall expect to meet on the appointed day?’

‘If I’m spared,’ answered the sufferer.

‘I’ll bring her, never fear,’ added the sanguine Mat, as she rattled the trays out of an immense trunk.

How they ever did it no one knows; but in a week everything was ready, and the sisters had nothing left to do but to sit and receive the presents that showered upon them from all quarters. How kind everyone was, to be sure! Six fine dressing-cases arrived, and were hung upon the walls; four smelling-bottles—one for each nostril; bed-socks, rigolettes, afghans, lunch-baskets, pocket-flasks, guide-books, needle-cases, bouquets in stacks, and a great cake with their names on top in red and blue letters three inches long.

Friendly fingers sewed for them; even the gentlemen of the house—and there were eight—had a ‘bee,’ and hemmed handkerchiefs for Mat, marked towels; and one noble being actually took off his coat and packed the trunks in layers of mosaic-work wonderful to behold. A supper celebrated the last evening; and even the doleful Lavinia, touched by such kindness, emerged from her slough of despond and electrified the ball by dancing a jig with great spirit and grace.

Devoted beings were up at dawn to share the early breakfast, lug trunks, fly up and down with last messages, cheer heartily as the carriage drove off, and then adjourn en masse to the station, there to shake hands all round once more, and wave and wring handkerchiefs as the train at last bore the jocund Mat and the resigned Lavinia toward the trysting-place and Amanda.

All along the route more friends kept bursting into the cars as they stopped at different places; more gifts, more hand-shakes and kisses, more good wishes and kind prophecies, till at last in a chaos of smiles, tears, smelling-bottles, luncheon, cloaks, books, and foot-warmers, the travellers left the last friendly face behind and steamed away to New York.

‘How de-licious this is!’ cried the untravelled Matilda, as they stepped upon the deck of the ‘Lafayette,’ and she sniffed the shippy fragrance that caused Lavinia to gasp and answer darkly,—

While Mat surveyed the steamer under the care of Devoted Being No. 10, who appeared to see them off, Lavinia arranged the stateroom, stowing away all useless gear and laying forth dressing-gowns, slippers, pocket-handkerchiefs, with an anguished smile. She had crossed the ocean twice, and was a wiser, sadder woman for it. At eight she turned in, and ten minutes later Amanda came aboard with a flock of gay friends. But no temptations of the flesh could lure the wary spinster from her den; for the night was rough and cold, and the steamer a Babel of confusion.

‘It’s perfectly delightful! I wish you’d been there, Livy. We had supper, and songs, and funny stories, and all sorts of larks. There are quantities of nice people aboard, and we shall have a perfectly splendid trip. I shall be up bright and early, put on my scarlet stockings, my new boots, and pretty sea-suit, and go in for a jolly day,’ said the ardent Matilda, as she came skipping down at midnight and fell asleep full of rosy visions of the joys of a

Life on the ocean wave.

‘Deluded child!’ sighed Lavinia, closing her dizzy eyes upon the swaying garments on the wall, and feebly wishing she had hung herself along with them.

In the gray dawn she was awakened by sounds of woe, and peering forth beheld the festive Matilda with one red stocking on and one off, her blonde locks wildly dishevelled, her face of a pale green, and her hands clasping lemons, cologne, and salts, as she lay with her brow upon the cool marble of the toilet-table.

‘How do you like it, dear?’ asked the unfeeling Lavinia.

‘Oh, what is it? I feel as if I was dying. If somebody would only stop the swing one minute. Is it sea-sickness? It’s awful, but it will do me good. Oh, yes! I hope so. I’ve tried everything, and feel worse and worse. Hold me! save me! Oh, I wish I hadn’t come!’

‘Shipmates ahoy! how are you, my loves?’ and Amanda appeared, rosy, calm, and gay, with her pea-jacket on, skirts close reefed, hat well to windward, and everything taut and ship-shape; for she was a fine sailor, and never missed a meal.

Wails greeted her, and faint inquiries as to the state of things in the upper world.

‘Blowing a gale; rain, hail, and snow,—very dirty weather; and we are flying off the coast in fine style,’ was the cheerful reply.

‘Have we split any sails?’ asked Lavinia, not daring to open her eyes.

‘Dozens, I dare say. Shipping seas every five minutes. All the passengers ill but me, and every prospect of a north-easter all the way over,’ continued the lively Amanda, lurching briskly about the passage with her hands in her pockets.

Matilda dropped her lemons and her bottles to wring her hands, and Lavinia softly murmured—

‘Lord, what fools we mortals be,

That we ever go to sea!’

‘Breakfast, ladies?’ cried the pretty French stewardess, prancing in with tea-cups, bowls of gruel, and piles of toast balanced in some miraculous manner all over her arms.

‘Oh, take it away! I shall never eat again,’ moaned Matilda, clinging frantically to the marble, as the water-pitcher went down the middle with a hair-brush, and all the boots and shoes had a grand promenade round the room.

‘Don’t speak to me; don’t look at me; don’t even think of me for three days at least. Go and enjoy yourself, and leave us to our doom;’ with which tragical remark Lavinia drew her curtains, and was seen no more.

Great heavens, what a week that was! Rain, wind, fog; creak, pitch, toss; noise, smells, cold. Broken sleep by day, woe in every variety by night; food and drink a delusion and a snare; society an affliction; life a burden; death a far-off blessing not to be had at any price. Slowly, slowly the victims emerge from the lower depths of gloom, feebly smile, faintly joke, pick fearfully but wistfully at once-rejected dishes; talk about getting up, but don’t do it; read a little, look at their sallow countenances in hand-glasses, and speculate upon the good effects of travel upon the constitution. Then they suddenly become daring, gay, and social; rise, adorn themselves, pervade the cabins, sniff the odours of engine and kitchen without qualms, play games, go to table; and, just as the voyage is over, begin to enjoy it.

Alas for poor Lavinia! no such resurrection was possible for her. Long after Mat had bravely donned the scarlet hose, cocked up her beaver and gone forth to festive scenes, her shipmate remained below in chrysalis state, fed by faithful Marie, visited by the ever-cheerful Amanda, and enlivened by notes and messages from fellow-sufferers in far-off cells.