Studies in History and Jurisprudence Vol. 1

This volume contains a collection of studies composed at different times over a long series of years. It treats of diverse topics: yet through many of them there runs a common thread, that of a comparison between the history and law of Rome and the history and law of England. The author has handled this comparison from several points of view, applying it in one essay to the growth of the Roman and British Empires, in another to the extension over the world of their respective legal systems, in another to their Constitutions, in others to their legislation, in another to an important branch of their private civil law. The topic is one profitable to a student of the history of either nation; and it has not been largely treated by any writers before Bryce, as indeed few historians touch upon the legal aspects of history. This is volume one out of two. 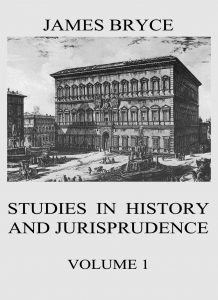 Studies in History and Jurisprudence Vol. 1

Studies in History and Jurisprudence Vol. 1.