This is the sequel to the book “Sylvia and Bruno”, a sentimental novel about two fairy children, first published in 1889, and forms the last novel Lewis Carroll published during his lifetime. This volume is beautifully illustrated by Harry Furniss. 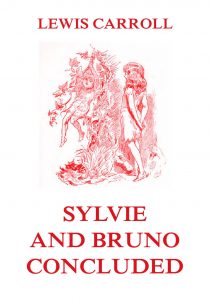 Two short pieces, “Fairy Sylvie” and “Bruno’s Revenge”, originally appeared in Aunt Judy’s Magazine in 1867. Some years later, in 1873 or 1874, Carroll had the idea to use these as the core for a longer story. Much of the rest of the novel he compiled from notes of ideas and dialogue which he had collected over the years (and which he called “litterature” in the introduction to the first volume).

Carroll initially intended for the novel to be published in one volume. However, due to its length, it was divided into two volumes, published in 1889 and 1893.

The novel is not nearly as well known as the Alice books. It was very poorly received and did not have many reprintings; modern commentators note that it lacks much of Carroll’s characteristic humour. The poem The Mad Gardener’s Song, widely reprinted elsewhere, is the best-known part of the book.

The introductory poem contains a double acrostic on the name “Isa Bowman”, one of Carroll’s child friends.