Professor Bryce’s work rises at once to an eminent place among studies of great nations and their institutions. It is, so far as America goes, a work unique in scope, spirit, and knowledge. There is nothing like it anywhere extant, nothing that approaches it. Without exaggeration, it may be called the most considerable and gratifying tribute that has yet been bestowed upon America by an Englishman, and, perhaps, by even England herself. . . . One despairs in an attempt to give an adequate account of a work so infused with knowledge and sparkling with Suggestion. Every thoughtful American will read it, and will long hold in grateful remembrance its author’s name. It is a work that takes instant rank as the keenest critique and most trustworthy description of America’s social and political life and is recognized as the most remarkable among English books for the accuracy of its statements, its fairness of judgment, and its clearness of comprehension. Written with full knowledge by a distinguished Englishman to dispel vulgar prejudices and to help kindred people to understand each other better, Prof. Bryce’s work is in a sense an embassy of peace, a message of good-will from one nation to another.

This is volume three out of four,  “The Party System & Public Opinion.”. 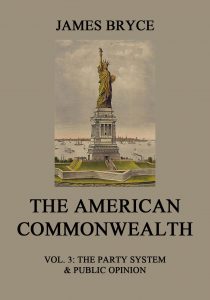