The American metropolis – From Knickerbocker Times to the year 1900

The author aptly characterizes this work as a “series of itineraries” by which the reader is made familiar with much of the history of Manhattan Island by being led to the very spots associated with important historical events. But this book is much more. It is surprising and refreshing to read a defense of the Five Points from the pen of so intelligent a witness. We who are deeply interested in New York history thank the author for the facts which he has collected. There is a unique arrangement of the interesting, instructive, and inspiring matter which makes it a literary work of a high order. And: the book has a distinct purpose — the interesting of the people in the history and historic localities of the city and the awakening in them of civic pride and affection. 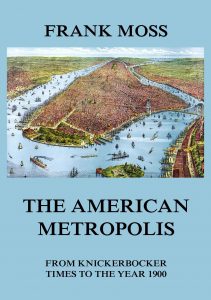 The American metropolis – From Knickerbocker Times to the year 1900

The American metropolis – From Knickerbocker Times to the year 1900.