The Care of Children, in Sickness and Health

The Care of Children, in Sickness and Health – Sebastian Kneipp

In this little work Father Kneipp sets forth the happiness, responsibilities and duties of motherhood, and he instructs mothers how to order their lives and how best to bring up their children. Father Kneipp also gives simple directions for dealing with the usual diseases of children. Sebastian Kneipp became known for the “Kneipp cure,” which he advocated for years. This method was based on water, fresh air, sunshine and a scheme of regular activity, and included walking barefoot in dew-moistened grass and on snow. 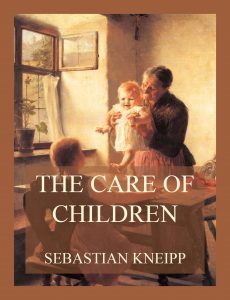 The Care of Children, in Sickness and Health.

The Care of Children, in Sickness and Health.

The Mother should partake only of a good healthy diet.

By this, however, I do not mean that which in everyday life is called and considered good but a diet that contains a good deal of nourishment which is suitable for the system and specially conducive to the formation of blood.

Those who are rich in blood and have its circulation in good order are, what is called, well nourished.

That which people generally consider good is as a rule merely prejudicial or to say the best of it, it is of no use to the system.

It is especially noticeable that the strongest and healthiest mothers and children are among the poorer classes in the country, whose food consists chiefly of the very simplest bread prepared from unadulterated flour.

That which is called Refined Flour may be the finest but it certainly is not the best, for its nutritive qualities are just those that have been taken from it. A sorry art indeed to extract from the flour exactly that which is really valuable and nourishing! This is now-a-days given to animals who certainly prosper better on the refining than men do.

One of the healthy poor women whom I have in my mind eats her bread-soup in the morning which supplies good nourishment to the blood and power to the whole body.

The midday meal is again prepared from the purest natural flour which partially retains the bran and as regards nourishment corresponds to the morning soup.

It is the same with the evening meal. In addition to this simple farinaceous diet potatoes are eaten, cooked in different ways, and although these last have been much abused in writings and undervalued and marked as containing but little nourishment, yet the Poor who live on them are not more behind in bodily strength than those who have something ”better”.

The fundamental principle is to have a very simple but nourishing diet.

Avoid refined bread and farinaceous food prepared of refined flour. I am not opposed to a meat diet, yet I advise those who take it never to be without farinaceous food of simple, unadulterated, flour.

Undoubtedly meat contains much nourishment, yet too much meat forms a heated and impure blood.

Vegetables should be steamed and not cooked in water, because in this way they form a diet of scanty value. Too zealous vegetarians have a peculiar appearance, their complexion is dull and they lack energy and strength.

As much as possible spices should be avoided, they are like hot fire which cannot be used by the system.

I would especially counsel Mothers to avoid taking acid foods, especially those cooked with vinegar; for this last is an enemy to the blood, it both impoverishes and spoils it.

On the other hand, I recommend pickle-cabbage because this acid is quite different to vinegar acid. As a rule very little acid should be taken; the system does not require it. if it is not spoilt by custom..

Strong salt is harmful and operates corrodingly on the internal organs. Ham, smoked meat and similar animal food I generally leave for other people to enjoy. Such nourishment usually begets great thirst, a proof that it is heating and more harmful than beneficial.

I am greatly in favor of milk diet. Yet I must here caution weakly people against taking too much, and recommend them to take it in small quantities, and eat with it black rye bread.

Once a lady asked me what she should take between meals as she often suddenly experienced great hunger. She thought ham, sausage, black-puddings and such like would perhaps be of advantage.

I advised her, in such a case, to eat a piece of good rye bread and to drink some sugar water which would nourish and make good blood. After some time I met this lady again and she thanked me for my good advice which she had taken with great advantage.

A glass of milk and a bit of black bread is of equal service and is for those who can assimilate milk even preferable. Avoid overeating. Those who take small quantities of food get more good from it, because it is much more easily and rapidly digested. An overfilled stomach cannot accomplish the work required of it by unreasonable men. Allow me to recall the old proverb “Cease eating while it still tastes good'” that is, before you are completely satisfied.

As regards beverages, a mother in a certain condition should drink neither beer nor wine. Beer fattens the body but gives it no elastic strength; it is a stimulating remedy whose consumption is pleasant.

Beer drinkers are poor in blood, however big a corporation or stoutness of body they carry about with them. Their bodies are only spongy and the internal organs are withered and flabby.

I wish to impress upon mothers that wine does not nourish; a piece of black bread which may cost less than sixpence contains more nourishment than two or three bottles of wine of the best quality. A mother must not forget that she has to nourish not only herself but her posterity.

The physical condition of her offspring is formed by the worth or worthlessness of the parental diet. Sweet delicacies and dainties I do not advise but to a Mother I decidedly forbid them.

Coffee, chocolate, tea and similar fashionable drinks have but little nourishment in them, and to a Mother they are certainly harmful.

These beverages are only palatable.

If a Mother drinks coffee twice daily she has just so often taken a good opening medicine which clears the stomach of all nourishment.

Malt-coffee has nourishment from the grain, but bread- and brenn-soup are decidedly preferable. Brandy and the various alcoholic drinks are nothing but poison. They act like tire which burns and destroys the body. A Mother who consumes these drinks ruins both herself and her offspring. If a Mother be thirsty, let her choose the drink offered her by the Creator. It is also the cheapest.

Drink, when thirsty, but if possible in small quantities only.

Thirst is a sign that fluid is lacking, but this can be supplied to the body in the shape of water.

If all Mothers would nourish themselves in the prescribed way, how healthy and happy they would be! How much more they could lay by in their money boxes which are so often rifled to procure nourishment which is merely so called, but in reality is nothing more than an expensive luxury which ruins the health, empties the purse, and destroys the prosperity and content of the family.