The Jatakas, or Birth-stories, form one of the sacred books of the Buddhists and relate to the adventures of the Buddha in his former existences, the best character in any story being identified with the Master. These legends were continually introduced into the religious discourses of the Buddhist teachers to illustrate the doctrines of their faith or to magnify the sanctity of the Buddha, somewhat as medieval preachers in Europe used to enliven their sermons by introducing fables and popular tales to rouse the flagging interest of their hearers. 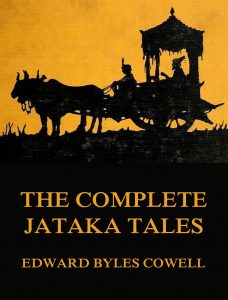 According to A. K. Warder, the Jātakas are the precursors to the various legendary biographies of the Buddha, which were composed at later dates. Although many Jātakas were written from an early period, which describe previous lives of the Buddha, very little biographical material about Gautama’s own life has been recorded.

The Jātaka-Mālā of Arya Śura in Sanskrit gives 34 Jātaka stories. At the Ajanta Caves, Jātaka scenes are inscribed with quotes from Arya Shura, with script datable to the sixth century. It had already been translated into Chinese in 434 CE. Borobudur contains depictions of all 34 Jatakas from Jataka Mala.